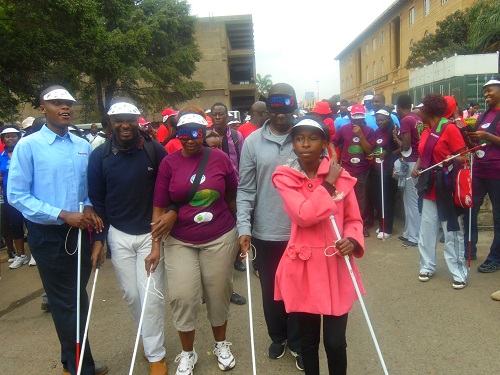 Say people stand to benefit a lot from marrying them

Nigerians with blindness have expressed displeasure over the kind of treatments they receive from governments and their fellow citizens, especially those without disability.

As the world marked this year’s International White Cane Safety Day on October 15, persons with disabilities under the umbrella of the Nigeria Association of the Blind have resonated with the challenges confronting them and appealed to stakeholders to come to their aid.

In separate exclusive interviews with The Point, members of NAB, Osun State chapter, said they feel embarrassed whenever they see blind and other PWDs begging for alms on the streets.

They begged the state government to build a school for the blind like other states have done and also employ more qualified persons with disabilities in the civil service.

They accused Nigerians who are sighted of jilting them after having a relationship with them with excuses that their families were against getting married to them.

The blind people also described as untrue that if those who are sighted marry them, they would give birth to children who are blind.

Expressing further concerns, the special people urged Nigerians to desist from writing them off because of their disabilities, saying that with adequate and necessary support, they could be independent and contribute meaningfully to societal growth.

According to Mrs. Titilayo Bukola Adedeji, the Women Leader of Osun NAB, the fact that she is visually impaired doesn’t stop her from working, taking care of her home and tendering for her husband and children.

Adedeji explained that most men who are sighted abandon blind ladies after dating them for some time, with excuses that their parents and other loved ones were against having a PWD as wives.

She recommended that government should sensitize members of the public to desist from taking advantage of their predicaments to subject them to emotional torture.

On their marital life, she said, “We get married to ourselves mostly because the able-bodied and those who are sighted don’t want to marry us. We should even sensitize members of the public on that.

“The sighted think we are going to become liabilities to them once they get married to us, whereas, it’s not like that because we do a lot of things without assistance or support. I thank God that my husband is enjoying me because I do all the house chores and also take care of my children.

“These men will come suddenly with excuses that their parents were the one ones who asked them to discontinue the relationship because, according to them, we will become liabilities to them. They will say their parents said we can’t cook, fetch water and take care of children because we are visually impaired. And that’s not true. If they marry us, they will know that the Lord is good.

“SOME OF THE BENEFITS MEN WILL DERIVE FROM GETTING MARRIED TO US ARE THAT WE WON’T CHEAT. IT’S WHERE OUR HUSBANDS LEAVE US THAT THEY WILL FIND US. YOU CAN’T EXPECT A VISUALLY IMPAIRED PERSON TO BE CHEATING ON HIS OR HER PARTNER. IT’S ALL THE ENJOYMENT OUR PARTNERS SEEK THAT THEY WILL GET ONCE THEY MARRY US”

“Some of the benefits men will derive from getting married to us are that we won’t cheat. It’s where our husbands leave us that they will find us. You can’t expect a visually impaired person to be cheating on his or her partner. It’s all the enjoyment our partners seek that they will get once they marry us,” the community grammar school teacher said.

On what the blind want from the government and other stakeholders, Adedeji said, “What we want government and other kind spirited Nigerians to do for us is that they should assist us in the special devices we use. The pen the sighted buy and use is not the same one we the visually impaired use. Ours is very expensive.

“Another assistive device we use is sold between N7, 000 and N9, 000. We will use a typing sheet and typewriter. We are now in the computer age and we use special computers. For some of us who have sought employment, they will invite us for interviews and we will perform well but, at the end of the day, they will tell us that we are qualified but not accounted for.

“Other challenges facing us are that whenever we visit a public officer, especially to see politicians, they won’t allow us inside their offices. The government officials we want to see will tell us that they are not around just because we can’t see. We don’t need sympathy; we need empathy and understanding from those who can see.”

She said, “It’s embarrassing seeing blind people or any other physically challenged person begging for alms. It’s not everyone who is blind or physically challenged that will want to beg. I will advise the government to pick anyone begging and keep them in one place for rehabilitation. Members of the public should also help us by desisting from giving the beggars, especially those who are blind money. They should rather refer them to our association for identification and if they want to even help, they should interview them to know why they are begging.”

Also speaking in the same vein, the Chairman of NAB, Osun State chapter, Akinsola Adekunle, explained that visually impaired men also find it difficult in getting married to sighted ladies.

He urged the state governor, Gboyega Oyetola, to write his name in gold in the few days his administration has by ensuring the domestication of the National Discrimination Against Persons with Disabilities (Prohibition) Act without further delay. He also appealed to the state governor to grant them scholarships and also provide job opportunities for them, saying that they couldn’t beg for alms.

Adekunle commended Oyetola for the support they have received from him so far, but urged him to accelerate efforts on the domestication of the disability act.

“In terms of marital issues, we are facing some difficulties. For instance, we the blind men have been having the challenge of marrying those who can see. And our difficulty doesn’t come from the lady we want to marry but their parents. Many parents don’t want their children to marry people with disabilities and I don’t know what is really wrong. Many people think that our disability was caused by our sins or other mysterious things. This condition can come to anybody at any time.

“I could recall when they posted some people who are sighted in special schools; they will say they won’t marry us because they fear that they may give birth to blind children. This is a wrong impression and it can’t happen. This condition is not contagious and neither is it hereditary. The fact that you married a blind person doesn’t mean you will give birth to a blind child.

“I want my people to know that there is hope and that there is ability in disability. They should not lose hope. They should know that they can impact their society. I want the government to do more for us. We need a school for the blind. We want an automatic job. We worked for the certificates we got from universities and it wasn’t just given to us because of our disability,” Adekunle said.

How Dufil lifts the visually impaired through investment in education

Money, political will holding back students with disabilities