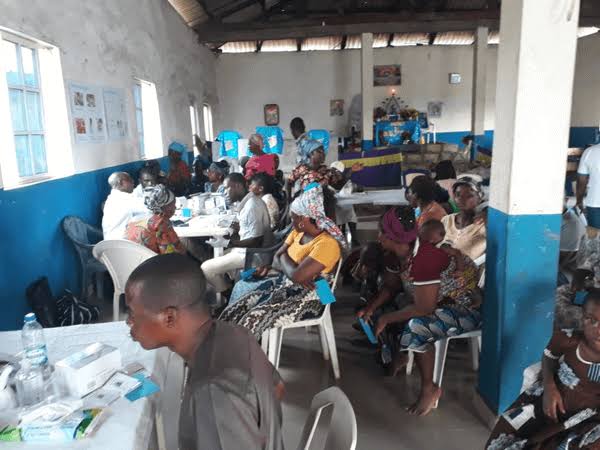 Pius Enefiok Nyong is blind and a leg amputee, who is also struggling with kidney problem and high blood pressure. However, the Lagos State Health Scheme, known as ‘Ilera Eko’ comes to the rescue as the scheme is helping Pius manage his health conditions, almost for free. Blessing Oladunjoye writes about how the scheme is delivering quality and affordable healthcare services to vulnerable persons in Lagos state.

It is estimated that Nigeria has 25 million Persons with Disabilities (PWDs). Because disability is extremely diverse, there are some health conditions associated with it, which result in poor health and extensive healthcare needs in many cases; only few disabilities do not require such. Generally, all people with disabilities have health care needs as everyone else. They, therefore, need access to mainstream healthcare services.

Article 25 of the UN Convention on the Rights of Persons with Disabilities (UNCRPD) reinforces the right of persons with disability to attain the highest standard of health, without discrimination. The reality, according to the World Health Organization (WHO) is that few countries provide adequate quality services for people with disabilities.

In Nigeria, inclusive healthcare is poor, both in terms of service and policy provision. Most PWDs in Nigeria rely on families, friends for care, and, in a few cases, the government.

PWDs, in different clusters, have also continued to lament the multi-faceted challenges and barriers that they encounter in accessing quality healthcare services.

PWDs are generally referred to as the poor of the poor, meaning they mostly cannot afford out-of-pocket healthcare services, despite that some of them, depending on their disability type, require more frequent visits to health facilities than others.

For instance, Persons with Albinism (PWA) continuously clamour for subsidized skincare products and support for surgery as skin cancer ravages the community. On the other hand, Persons with Intellectual and Developmental Disabilities (like Cerebral Palsy, Down Syndrome, Autism, etc.), in some cases, have both physical and psychological illnesses and are more likely to require regular expensive medical interventions from therapists (occupational, speech, cognitive behavioural, etc.) and general practitioners.

Towards achieving Universal Health Coverage, which seeks to ensure that all individuals and communities receive the health services they need without suffering financial hardship, the Lagos State Government (LASG) in 2015 launched the Lagos State Health Scheme (LSHS).

In 2021, the Babajide Sanwo-Olu administration launched ‘Ilera-Eko’, as part of efforts to create more awareness and sensitisation on LSHS.

“…‘Ilera Eko’ is to assist the government in achieving the State’s agenda of providing universal health coverage for residents,” state Commissioner for Health, Prof. Akin Abayomi, had said during the launch in February 2021. Under the scheme, an individual pays N8,500 per annum, while a family of six (father, mother, and four under-18 children) pays N40,000 annually.

As of February 2021, 214 health facilities had registered for the scheme with 142 private and 72 public facilities across the State.

When the LSHS was launched in 2015, all LASG workers were mandated to register to enable them and their families to have access to quality healthcare services, but with the launch of ‘Ilera Eko’ in 2021, the LASG has approved N750 million from the equity fund for the payment of health insurance premiums for 100,000 vulnerable and indigent residents of the state. This has helped indigent citizens to enroll in the scheme without making payments.

“2500 [free] slots were given to PWDs in the state, it was managed by the Lagos State Office for Disability Affairs (LASODA) and it was shared among all the disability clusters across the state,” said Barrister Bolarinwa Salami, Chairman of the Lagos State Chapter of the Nigeria Association of the Blind (NAB). “2500 PWDs were registered in 2021 and the governor paid for them for one year, because the scheme requires annual registration.”

Beneficiaries were selected through PWD associations/cluster groups, and NGOs working with PWDs. Individuals who are not members of associations can also walk into LASODA to indicate interest to be a part of the scheme.

The NAB Lagos Chairman also disclosed that “recently, in commemoration of the governor’s birthday, there was a notification to add 5000 indigent people to the scheme, but we’re not sure if this would be to onboard new people or if it would be to renew the premium for those that have been registered.”

In February 2022, the LASG launched three additional health plans for the scheme to cover more health challenges, accommodate prevalent medical conditions and address the economic realities of residents, especially those in the informal sector. The expansion of the scheme provided a platform for senior citizens in the State and Lagosians in the diaspora to enroll.

Dare Ogundairo, General Manager of LASODA while speaking at a sensitization program to educate PWDs in the state about the health scheme said the scheme would enhance PWDs’ access to affordable healthcare in private and public hospitals in all Local Governments and Local Council Development Areas of the State, adding that it would afford all enrollees the opportunity to enjoy immense benefits.

Indigent and PWD beneficiaries of LSHS

As of the end of July 2022, a total of 629,637 lives are registered under Ilera Eko and there are 1,836,275 registrants under the private health plans that are operational in Lagos. Cumulatively, About 2.5 Million (2,466,512) Lagosians currently have access to health insurance in Lagos State.

One of the PWD beneficiaries, Mr. Pius Enefiok Nyong, a young man who had complications from Mellitus diabetes type 2, which led to total blindness, amputation of his right leg above the knee, kidney challenge, and high blood pressure, was enrolled in the scheme (for free) in September 2019, when officials of LASHMA conducted house-to-house enrolment of Lagos residents.

However, Mr. Nyong did not activate the service until 2020 when he registered at Dialyzer Medical Centre, Mafoluku – Oshodi, a service he has described as timely and smooth.

“Imagine having to deal with 4 critical health issues, the cost, and expenses coupled with the fact that I do not have any substantial source of income anymore, but the timely intervention of this health scheme has really subsidized my treatment in a very big way,” Nyong admitted.

When his subscription expired in March 2022, Nyong made sure he renewed the service to keep maximizing the benefits.

“I was admitted for serious complications three weeks ago, I was [treated] and discharged without paying a dime, He said”

Another beneficiary, Mr. Taofik Adisa Owoiya, a visually impaired man in his thirties, said he was enrolled in March 2021 through the 500 slots that NAB got from LASODA. Owoiya who has not been to a medical facility since 2015 activated his policy number at Randle General Hospital in Surulere and has since been receiving medical care for high blood pressure.

“Since last year that I registered, I don’t miss my hospital appointments, because they are free and I’ve done about four tests where I didn’t pay a dime,” he added.

For Mrs. H. Wellington, a teacher in a private school in Ikorodu who delivered a baby girl through a cesarean session in April 2022 after subscribing to the scheme for three months with N10,5000.

“I utilized my health insurance scheme in April when I was going to deliver my baby. I was not prepared for a CS because the scan and tests that I had done had shown that everything was fine and that I would have a normal delivery,” she said

“When it was time for me to deliver, I found out that it would be through CS but that the scheme covers it. My bill was over 100,000 but I didn’t pay anything. Before the CS, I was asked to purchase blood and some drugs, and do tests and scans, and I didn’t pay for all of them. The only instance where I had to pay was when I used facilities outside of the hospital where I registered.

“It would have been extremely overwhelming for me to pay all of that money because I wasn’t prepared for CS.”

Share
Facebook
Twitter
Pinterest
WhatsApp
Previous articleINCLUSIVE EYE HEALTH: Nigerians with disabilities are 27 times more likely to go blind – Sightsavers
Next articleHere’s how an NGO is offering hope to children with down syndrome, other disabilities in Sokoto