HomeNEWSHere’s how an NGO is offering hope to children with down syndrome,...
NEWS

Here’s how an NGO is offering hope to children with down syndrome, other disabilities in Sokoto 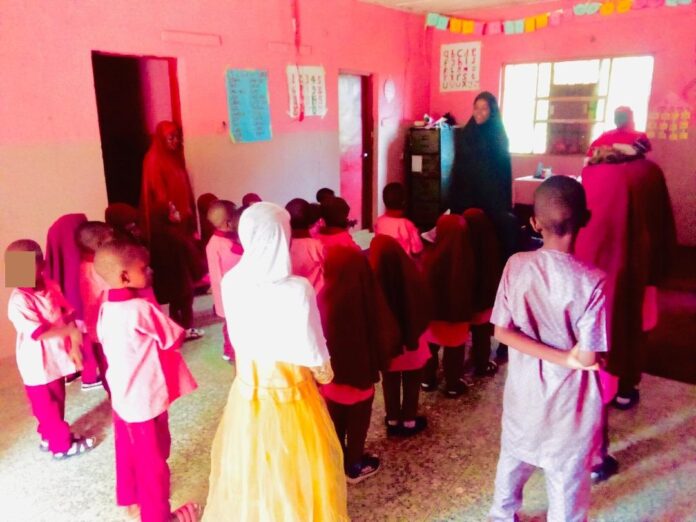 Valerie O Aihimegbe, a 16-year-old girl with Down syndrome, was enrolled in a private school in Sokoto alongside people without disabilities. However, due to a lack of improvement and proper care, her parents withdrew her from the school and enrolled her in Handicap Opportunity for Positive Engagement Society (HOPES), an organisation offering free education to children with disabilities.

Aihimegbe speaks but cannot hear, and this has affected her learning capability. Before HOPES, she couldn’t hold objects or sit in a place. But now, she is participating actively in school activities with other students.

“During assembly, when other children are reciting the national anthem, she often participates to show that she is following. There are some gestures she displays when reciting I am pumping my tyre. She will be moving her hands the way others are moving theirs. Her parents said she likes music, and she sings once in a while. She is getting along with us,” Rafaatu Ibrahim, the proprietor and co-founder of HOPES explained.

The scholarship allows Valerie to go out everyday to see different colours and people instead of being kept at home.

“The problem with keeping them at home is that they will be stagnant, and it wouldn’t allow their mental faculties to develop because they see the same colour and set of people every day.

“Changing their environment helps them to develop their mental faculties. If you leave those children in one place, it would make them worse, but taking them out to see what other people are doing would help them. Although it takes time for them to change positively because such changes take a gradual process. But without relenting, they will be useful to the society,” Rafaatu asserted.

At HOPES, teaching is more practical than abstract, and the subjects are restricted to English and Mathematics. For instance, an apple or a toy aeroplane could be used to explain the alphabet ‘A’.

We try as much as possible to space the lessons until we are certain they can identify alphabets or words and count by themselves,” Maymunatu Abubakar, one of the teachers, explained.

“The classes are not divided into pre-nursery, nursery, or primary. but the pupils  are  grouped according to how they have improved. Based on their performance in their exams and level of assimilation at the end of each session, we will create special class B for those who have improved. We will also upgrade the way we teach those in special class B. That is how we determine their promotion till they are qualified to go to secondary school,” she added.

17-year-old Mustapha Muhammad was formerly enrolled in a public special school but  Muhammad’s parents withdrew him from the public school due to overcrowded classrooms, unconducive environment, as well as lack of learning facilities and required support.

Just like Aihimegbe, Muhammad has Down syndrome. Before he was enrolled at HOPES, he couldn’t do anything with his hands. His situation is, however, changing as he can now pick objects by himself.

Rafaatu, commenting on the improvement observed in Muhammad, said, “If the power supply is restored, Mustapha will come to me and say “ankawo wuta” in Hausa (meaning light has been restored), and then he will turn on the switch.”

Fourteen-year-old Habibat Usman is another beneficiary at the NGO. This reporter gathered that she used to scribble zeroes in her book. Although she can speak and hear, she also has Down syndrome.

“Whenever she (Habibat) is going home, she will say, ‘Aunty, bye, bye’ and in the morning, she will say aunty good morning. She is calm now. We used to chase her to [get her to] sit down in one place, but now, she understands that she has to behave well at school,” Rafaatu disclosed.

One of the parents, Muhammad Kabiru, who withdrew his child from a public special school said, “I was introduced to HOPES by one of my colleagues, and I was told it is a well-established school suitable for them. So far, I am very happy with how the school is taking care of the children, especially the vulnerable ones.

“My child is always excited about going there [to HOPES]. Even if there is a holiday or during the weekend, he would still want to go. He would take his uniform, insisting that he must go to school. I can testify that they are taking proper care of him here,” he said.

HOPES, a non-profit organisation caters for the needs of children with disabilities, offering them free education. It was established in 2018. Thirteen students have been awarded scholarships by HOPES. Most beneficiaries are children with hearing and vision impairment and mental health disabilities, especially Down syndrome and autism.

As part of the efforts to effectively educate the children, Rafaatu is presently enrolled in Shehu Shagari College of Education to study Special Education. Rafaatu’s quest to acquire more knowledge became imperative, considering the experiences of children with disabilities. In addition to being neglected and stigmatised by society, people tend to see them as a burden. Many of them also lack access to the kind of education that suits their needs.

Children with disabilities are more likely to be out of school

A report published in Premium Times last year revealed that out of the country’s about 10.2 million out-of-school children, according to Universal Basic Education Commission (UBEC) data, Sokoto has 436,570.

But according to the Child’s Rights Act (CRA), every child is entitled to free, mandatory and universal basic education provided for by the government.

Last year, the National Commission for Persons with Disabilities (NCPWD) said over 100,000 PWDs would be awarded scholarships this year to study within and outside the country.

The Executive Secretary of the NCPWD, James Lalu, had said the Commission is partnering with the Universal Basic Education Commission (UBEC) to see how to make education attractive to PWDs.

Meanwhile, Lalu could not be reached for an update on the execution of the project and plans for continuous intervention for PWDs proved abortive, as several calls and messages put across to him were ignored.

All efforts to also reach the Chief Press Secretary to Sokoto State Governor, Muhammad Bello, on the plan and policies of the state government concerning the education of children with disabilities proved abortive, as several calls and messages put across to him were also ignored.

An email sent to the state government’s official email address was yet to be opened, according to an email tracker employed by this reporter.

Also, the Commissioner for Education in the state, Bello Abubakar Gwuiwa, did not respond to the several SMS and WhatsApp messages sent to him.

One of the core objectives of HOPES is to reduce the number of out-of-school children with disabilities in Nigeria.  “We aim to give them sound education to stand for themselves in society so that they will not be left behind and can also do what those without disabilities can do through education,” AbdulKareem Ibrahim, a co-founder of the NGO noted.

This reporter gathered that the school also has a section for students without disabilities, where parents pay their children’s tuition fees. The income generated from this section, as well as donations from philanthropists and funds from the founder, are used to pay the salary of the staff and other expenses.

On the section of the school that offers scholarships to children with disabilities,  AbdulKareem said, “Most of the parents brought their children to our school for better performance and care. The parents always appreciate our work on their children as they know how difficult it is to handle such children. We have received a lot of positive feedback and recommendations from the parents.

“Most of our children are from average-income families, where it is hard for them to spend a lot of money to send their children outside the country where children with such needs are catered for. The school was created to serve the community, most especially children with special needs.

Speaking on the other challenges, Rafaatu mentioned that the non-spacious rental apartment is hindering other students from benefiting from the scholarship. According to her, a permanent apartment owned by the school will go a long way to improve the initiative.

“We have not been able to publicise our services because we are afraid of receiving children we cannot handle. I believe there are many in society, and the expectation will be high, but we run the school from our pockets, so we currently lack the capacity to care for more,” she said.

She further said the NGO needs experts in special education who would volunteer to sensitize the teachers on how to train these children better. Although they have the same curriculum with children without disabilities, the methodology is different.