People With Disabilities Present Charter Of Demands To Lagos Government 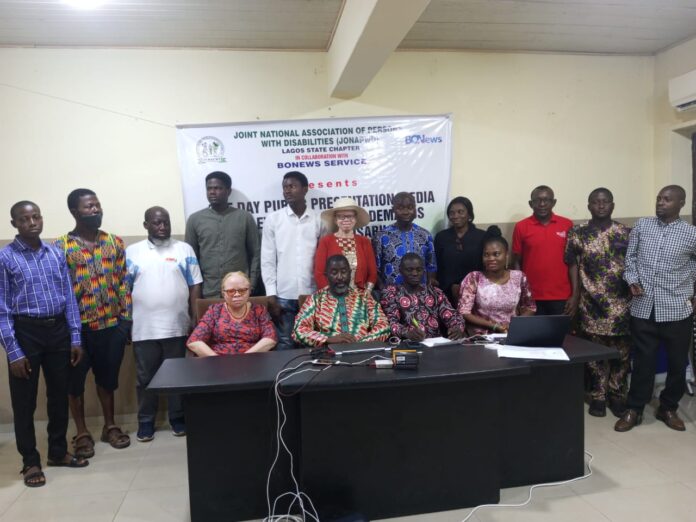 The Joint National Association Of Persons With Disabilities (JONAPWD), Lagos State Chapter, has called out the Babajide Sanwo-Olu-led Lagos State Government to pay more welfarist attention to issues affecting their members such that they too will have more sense of belonging in societal citizenship.

The group of special citizens made the passionate call out on Thursday while presenting what it tagged a Charter of Demands in a One-Day Public presentation/ Media Parley at the International Press Centre, Ogba, Lagos.

According to Adebayo, the current administration in Lagos State has not been responsive enough to the plight of the members who are still largely being discriminated against in a lot of areas such as transportation, employment logistic facility as in the safety of members who have to work around for the normal human survival effort as done by their other normal fellow citizens.

The sharp-talking JONAPWD leader noted that the government has not really done much about the Disability Law which had earlier been put in place by the state.

To this end, the association is demanding that a Governing Board be set up to be strictly saddled with seeing to the welfare of people with different forms of disability in the state.

The association also wants the state government to set up Disability Offices in all the local government councils so that the members can enjoy easy access to services that will help their welfare all the time.

JONAPWD is also demanding the provision of special education facilities across Lagos State so that the members can enjoy their right to education as any other regular citizen does.

Adebayo, at this juncture, harped on the need for the government to put in place an inclusive educational policy which in principle and practice will be considered fair to everybody, including the people with disabilities.

“In fact, we need a full-fledged department to see to the educational affairs of our members. The 49 inclusive schools should be adequately equipped with not only material resources friendly to our various needs but also with trained and motivated teachers to aid training for a lot of our members who are currently being denied access to education as a result of their disabilities.

About 90% of people with disabilities cannot go to school even as they desire to go. This is unfortunate”; Adebayo bemoaned.

He also demanded that a special health insurance policy be put in place to particularly take care of people with special challenges.

The call was also extended to the Lagos State House of Assembly to, as a matter of urgency, enact a law to take care of the people with special needs.

Dr Adebayo noted that this is another good time to harp it on the current government and the incoming one in the forthcoming 2023 election adequately factor in the welfare of people with disabilities.

“A situation with inadequate availability of specially trained teachers whereby 80 children with special disabilities will be in the care of one single teacher is unacceptable”; Adebayo stated.

He further observed that though the Lagos State Office Of Disability Affairs (LASODA) is ten years old, it has not made a single policy statement in respect of the people for whom it was established.

“Disability issues should not be politicised at all. It is not a political issue”; he posited even as he noted that LASODA itself is underfunded and understaffed.

This is even as the association pointman advocated a policy of heavily subsidised living for the special people because, according to him, it costs much more for them to survive than their normal fellow humans.

Adebayo went ahead citing an example that for a visually impaired person like him, a laptop that will cost a normal user N200,000 will cost him some additional N800,000 to possess and operate effectively; meaning that he needed N1.2m to own a laptop and get it adequately equipped with the necessary software that will make him derive all the benefits enjoyed by the same ordinary laptop that costs his normal neighbour just N200,000.

The JONAPWD presentation/media parley was organised in collaboration with BONews, an online publication by Blessing Oladunjoye.