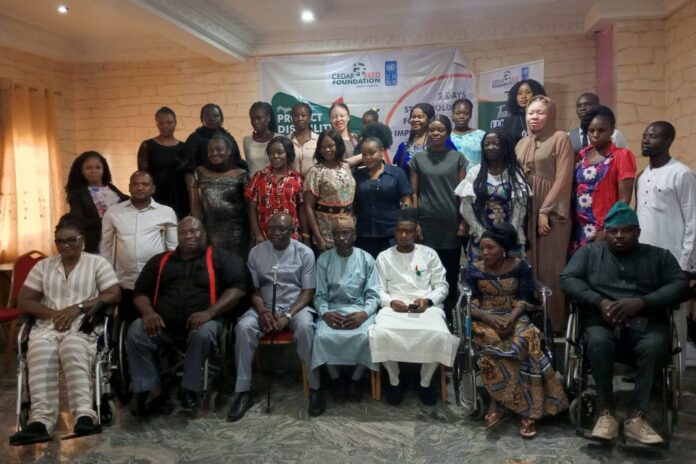 CedarSeed Foundation has launched a project known as “Project Disability Inclusion” a training manual on voter’s education and engagement of stakeholders to ensure full implementation of Section 54 of the electoral act.

It was launched during a two-day stakeholders’ forum organized by CedarSeed foundation on 8th and 9th November, 2022 in Abuja with the funding support from The United Nations Development Programme (UNDP).

The event which was tagged Agenda On Stakeholders Forum for Project Disability Inclusion (PDI) brought together stakeholders from Organizations of Persons with Disabilities (OPDs), INEC, NCPWD, the Media among others to discuss different challenges faced by Persons with disabilities during elections.

The Program Director, Rose Daniel told The Qualitative Magazine(TQM) that the essence of the PDI is to bring to the fore challenges faced by Persons with disabilities during and proffer solutions towards curbing them to enable PWDs participate fully in the 2023 elections. It is geared towards galvanizing support of relevant stakeholders towards promoting disability inclusion in the electoral process. She said; going forward, all stakeholders should take cognizant of persons with disabilities during elections in order to enhance inclusive electoral process in the 2023 elections and beyond.

In a similar vein, the Project Officer, Shedrack Danladi, said that PDI is designed to enhance inclusion, transparent, and non-violent elections especially for persons with disabilities.

He pointed out that PWDs have been highly marginalized and excluded in the major activities such as the elections over the years and going by WHO estimated, PWDs make up 15% of Nigerian population of 200 million people.

“A significant portion of our population is excluded from the electoral process, public infrastructure, access to polling units, and political participation.”

He said that project is to ensure the full implementation of Section 54 of the Electoral Act 2022 which mandates the electoral body to make special provisions for persons with disabilities in elections which includes priority voting, provision of assistive electoral materials for PWDs, ensure the security and safety for PWDs in elections.

Muhammad Murtala, Desk officer, PWDs, INEC Kaduna Head Office told The Qualitative Magazine (TQM) that INEC is ready to conduct inclusive, free and fair elections in 2023 because INEC has been taking positive steps to mainstream disability inclusion in their operations. INEC has appointed Disability Desk Officers in the 36 States including FCT and in the 774 Local Government Areas. He also said that INEC has made special provisions such as braille ballot guide for the blind and they will be allowed also to be accompanied by trusted persons to the voting cubicle, magnify glasses for persons with albinism, priority voting as well as ensuring that ballot boxes and voting cubicles are made accessible for persons with physical disabilities.

Speaking further, he urged PWDs to come out en masse and exercise their right of voting because PWDs should play part in determining leaders in Nigeria.

Murtala eulogized CedarSeed Foundation for lessening the work of INEC with the project and expressed INEC’s appreciation and reiterated INEC commitment towards ensuring that every PWD who is eligible will vote in the next elections.

The Executive Secretary of the National Commission for Persons with Disabilities (NCPWD), Mr. James David Lalu represented by Acting Director, Social Integration, NCPWD, Mr. Lawrence Idemudia while speaking to The Qualitative Magazine said that PWDs are faced with a lot of challenges at the polling units during elections but it has improved going by the engagements of OPDs with INEC, the electoral body has made a lot of special arrangements for PWDs such as election day inscription posters for the Deaf Voters, braille ballot guide, Priority Voting and many others. He urged PWDs to come out and participate because all interest has been taken care of by INEC.

In his goodwill message, he assured the foundation of the Commission’s support and appreciated them on project which he described as being laudable and it is coming at the right time.

The event witnessed interactive session on the significance of voting credible leaders and there were support remarks from Ministry of Justice, IPAC, NPF, EU, UN, among others.