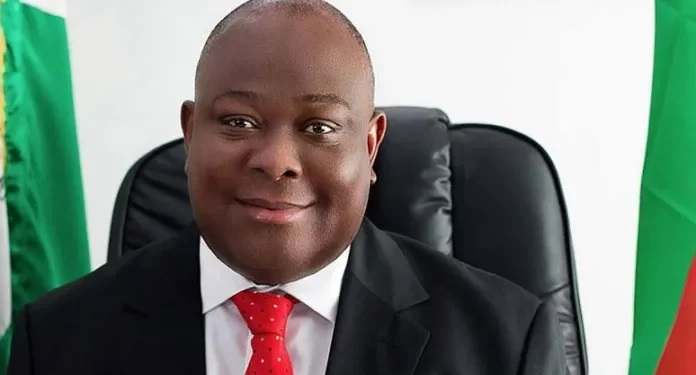 The All Progressives Congress(APC) candidate for the Imo West senatorial district election, Senator Osita Izunaso has empowered over one thousand Persons With Disabilities (PWDs) in Imo State.

Izunaso distributing the items under the auspices of his foundation, Kpakpando in Owerri the Imo State capital expressed concerned about the neglects of the rights of the special citizens in the country.

According to him, a lot of the rights of the PWDs have been trampled upon, promising that when he gets a second chance to represent his people at the upper chambers he would sponsor bills that we ensure the enhancement of these rights.

“The PWDs does not deserve the treatment they are getting now, the current bill about their rights need to be amended, they deserve more than the five percent they are getting, look at the the situation where they are issued certificate of disabilities, this on its own is discriminatory.

” When I get the opportunity to represent my people,I will ensure the bills include their rights,no discrimination, they would have special facilities in public buildings,this is how it’s done other advanced place.” Izunaso said.

The kind gesture extended to the PWDs is an annual programme instituted by the former senator,Izunaso who represented Imo West at the National assembly since 2005.

Mrs Pat Johnson-Oseh,Director General,Kpapkando foundation in her speech earlier at the ocassion promised that they would continue assisting the PWDs and give them a sense of belonging.

She said “The past 17 years has left us speechless with the level of work and outstanding contributions we have been able to accomplish in the lives of our darlings ,those many people only identify or classify as persons with disability.

”We looked beyond the obvious and thought of becoming their ability-eyes to the blind ,legs to the lame ,and a voice to the dumb.