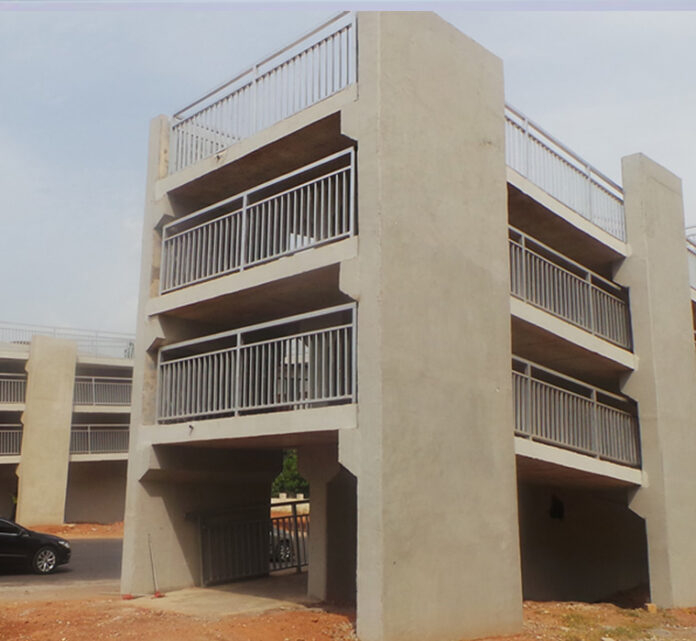 Pedestrian bridges in the Federal Capital Territory (FCT) Abuja are fast becoming a business centre and a place where defenceless users are disposed of their personal belongings, TUNDE OGUNTOLA writes.

Pedestrian bridges are built to avert incidences of pedestrians who often lost their lives after being hit by fast-moving vehicles on major roads. It has also helped to reduce the staggering statistic of road users who sustain permanent injuries following the non-availability of pedestrian bridges. The bridges have also brought succour to wheelchair users who are accustomed to sharing the road and battling automotive traffic while trying to cross the road.

Though not enough pedestrian bridges are built by the Federal Capital Territory Administration (FCTA) across major roads at the city centres, money spent to build pedestrian bridges are huge to ensure that it provides a safe mode of transit for residents that do not interfere with other traffic on the road, sadly most of them are now used for other purposes.

“Ultimately, human life is sacrosanct and valuable as the costly consequences of not using a pedestrian bridge have been unimaginable, the primary reason why the bridges were constructed beyond making the nation’s ‘gem city’ a lovely and safe ‘haven’ for many,” said Gambo Dingyadi, a public affairs analyst.

Obviously, one could imagine that Abuja, being the seat of power, is well policed to prevent crimes, but hell no. The city, like many other cities in the country, has its black places.

When LEADERSHIP Weekend spoke with some residents of the nation’s capital on why they prefer crossing over the busy roads on foot rather than using the pedestrian’s bridges, they harped on the danger of passing through pedestrian bridges, especially at night.

‘’My phone was forcefully collected from me at gunpoint by hoodlums at Kubwa Bridge. Afterward, I received a debit transaction alert via email at night after several attempts to reach my bank’s customer care service using my wife’s phone failed.

‘’I do not know how the criminals got my pin or the phone password. Sadly, I just received my salary, and they withdrew all the cash in my account using a POS. Even though I still use the pedestrian bridge to cross safely to avert being hit by a moving vehicle, the memories of how I was robbed on this bridge can’t be easily forgotten,’ he said.

Another resident who is a civil servant, Ms Catherine Danladi while narrating why she stopped using the bridge said she saw a trail of blood in one of the bridges while on her way to work in the morning. She said that she was of the view that someone must have been stabbed on the bridge as the bloodstain was still fresh.

“Since the day I saw that trail of blood, I have not been able to take it out of my mind. I no longer have the self-assurance to cross safely through the pedestrian bridges alone even during the day. I have heard a series of sad stories of how people were attacked on pedestrian bridges at night, just to steal from them.

“I heard of how a young lady was almost raped by some hoodlums who took her phones, money, and other valuables. She was almost being raped, if not for the arrival of some police personnel that saved the lady from the hands of the hoodlums. But she was not lucky enough, as they ran away with her valuables,” she said.

A student from Edo state, selling wares at Nicon Junction pedestrian bridge, who preferred to be addressed as Nosa, explained that on several occasions they have gotten the report of how young ladies became victims to hoodlums on the bridge. He said that the hoodlums target mostly females who they believe do not have the strength to fight back when they are attacked.

Nosa said that heard of an incident where two girls were raped on Nicon Junction Bridge when they appeared unwilling to let go of their valuables and wanted to fight back. He said that on most occasions the hoodlums are more than three in numbers to ensure that they are successful in the horrific operation.

“Sometimes, when they want to operate, they come to us late on the bridge and tell us to leave that it is late already, so we should close. If any of us try to argue with them, they will attack that person with knives and even steal our wares. Most times we have to close for the day if we see them. Majorly, their targets are mostly females, even if the ladies are walking in numbers on the bridge at night, they will attack them and dispossess them of their mobile phones, money, wristwatches, and other valuables.

“The truth is that the pedestrian bridges in FCT are always dark in the night, there is no way somebody can be safe. Like you know, evil thrives mostly in the dark, that is why the hoodlums make use of the darkness around the pedestrian bridges to perpetrate evil on innocent victims who cannot cross the expressway. Sometimes, I wonder why the FCT minister would construct pedestrian bridges without installing electric lights on them to discourage criminal tendencies at night.

“I am of the view that if there were lightning on Abuja pedestrian bridges, it would go a long way in reducing crimes recorded at night on the bridges daily. Also, there should be uniformed police presence stationed at the pedestrian bridges at night to discourage hoodlums from committing evil. Because, if they see uniform police around the bridges, they will be scared,” he said.

However, despite the security challenges faced on the pedestrian bridges at night, most people see some of the bridges, especially those located near popular junctions as big markets to buy and sell during the day.

Some popular pedestrian bridges turned markets are that of Galadima bridge, along the Kubwa expressway, Dei-Dei junction bridge and Mararaba bridge. For Mararaba bridge it has been overtaken by beggars of all sorts and pickpockets. Household items of various kinds are sold on these bridges, ranging from food, clothing, to cheap mobile phones, phone accessories, and others.

The business activities on the bridges make it always crowded, and the pedestrians can only navigate through the narrow space left by traders who display their wares on a better part of the bridge. To avoid chaos, some pedestrians would decide to avoid the crowd and opt to cross over the major roads, instead of using the bridges.

Investigations by LEADERSHIP Weekend unravelled reasons residents in the nation’s capital now prefer crossing the highways to using the pedestrian bridges, one of the prominent reasons include long distance to get to the bridge or fear of being attacked by hoodlums that use the bridges as bate to get their victims and dispossess them of their valuables. It was observed that most of the bridges in the FCT have been grossly abused and used for purposes other than what the bridges were constructed for.

LEADERSHIP Weekend also observed that most of the pedestrian bridges in the Federal Capital Territory do not have an electrical power network supply or are not adequately illuminated. Meanwhile, for the few pedestrian bridges that have sections where persons with disabilities (PWDs) can use their wheelchair, it has been turned into public toilets where users and beggars answer the call of nature when they are pressed, which has made it impossible for PWDs to use them.

Reports also revealed that there have been endless claims of theft and rape perpetrated by hoodlums on the bridges at nights, but, during the day, everything looks normal and natural, with scanty numbers of pedestrians using some of the bridges, with little or nobody anticipating any criminal act at that time of the day.

Mrs. Salami Ephraim, one of the pedestrians that use the bridge on a daily basis, said that the activities of traders on the bridge make it difficult for people to have free movement, calling on the FCT transport secretariat to do something about the development.

Mr. Godfrey Ikechuckwu, a social analyst, believed that the authority of FCT has a lot to learn from Lagos State when it comes to enforcement of the maintenance and usage of pedestrian bridges.

“When you visit Lagos, you will see the Lagos State Traffic Management Agency (LASTMA) everywhere, making sure that traffic laws are not violated by anybody. If anybody dares to violate the laws, either by wrong parking, the crossing of busy expressways, and selling on the pedestrian bridges, that person must be ready to pay huge fines. That is why they always say in Lagos that the fear of LASTMA is the beginning of wisdom,” he said.

Adeh said the Police need such information to beef up security and also ensure that citizens go about their daily lives without being harassed.

“I will call the DPO whose locations are closed to pedestrian bridges immediately to ensure that they beef up security around those locations.

“Everybody deserves the right to go about their daily activities without being harassed or intimidated.

“Please, help me to urge FCT residents to report cases of harassment immediately to Police Station.’’

She added that Police don’t work in isolation as they need information from members of the public to protect them and ensure that the society is free from crime.