HomeOTHER NEWSFCTA evacuates 93 street beggars,17 children use for begging in Abuja
OTHER NEWS

FCTA evacuates 93 street beggars,17 children use for begging in Abuja 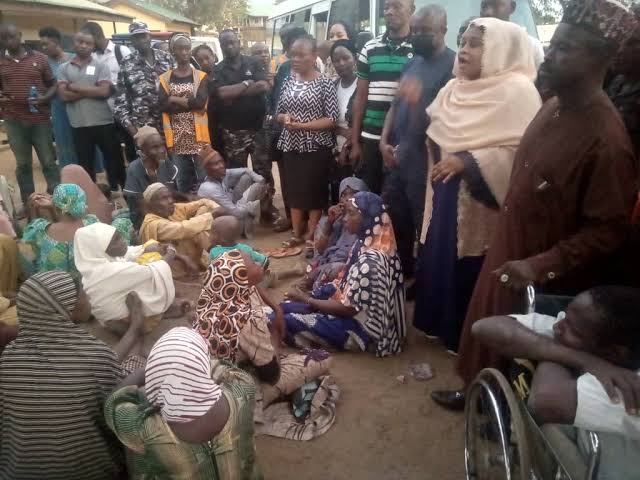 The Federal Capital Territory Administration (FCTA), on Wednesday evacuated no fewer than 94 street beggars, imainly old men, women and 17 children who are being used to beg in the city.

The Mandate Secretary for FCTA Social Development Secretariat, Mrs Hadiza Kabir, made the disclosure, while answering questions from newsmen after cross examining the beggars, including the children in Abuja.

Kabir explained that the measure was part of continuous efforts of the secretariat to rid the city of environmental and human nuisance as instructed by the FCT Minister of State, Dr Ramatu Aliyu.

The secretary revealed that the minister had send a strong warning to street beggars in Abuja, and mandated the secretariat to evacuate all beggars on the streets of Abuja.”

The Social Development Secretariat, which is under the purview of the FCT Minister of State, Dr Ramatu Aliyu, will continue to be up and doing to apprend street beggars, document them and repatriate them to their various state governments.

”What is more worrisome to me is the involvement of innocent children, who are supposed to be in school going into this ugly situation of begging.”

We are going to take custody of the children, rehabilitate them and eventually reunite them with their families,” she said.

Similarly, Kabir frowned at the increasing number of people flooding the major streets of Abuja with people with health condition soliciting for financial assistance for such persons.

She said that the secretariat would identify and profile them, follow the hospitals they might have gone to, if their cases were genuine, the FCT Administration would help them

“But if they were found wanting, definitely they will be prosecuted,” she said.

He noted that it was the mandate of the department to ensure the enforcement of the Child Rights act to make sure that no child was on the street or out of school.”

Any abuse of child right will not be tolerated. We have synergy with the Nigerian Police Force, the judiciary and in fact, social welfare is the custodian of the registry of Family Court.”

So, we already have that synergy with the judiciary in handling issue related to the family as the case of children belongs to a family.“

So, we will find out their parents. Now we are going to handover the children to the Gender Department for proper up keep. We will now look for the parents and hand them over to the Family Court which will decide their faith.

”He warned that anybody found exploiting children, denying them education and using them for begging would be prosecuted, according to the child right act.

Amar said that the evacuation team of the secretariat had also apprehended somebody who was into the business of moving round major streets of Abuja with people with one health condition or the other begging for money.

He said the department would conduct thorough investigation to verify his claim and “if he is found wanting the law will take its course on him.” (NAN)