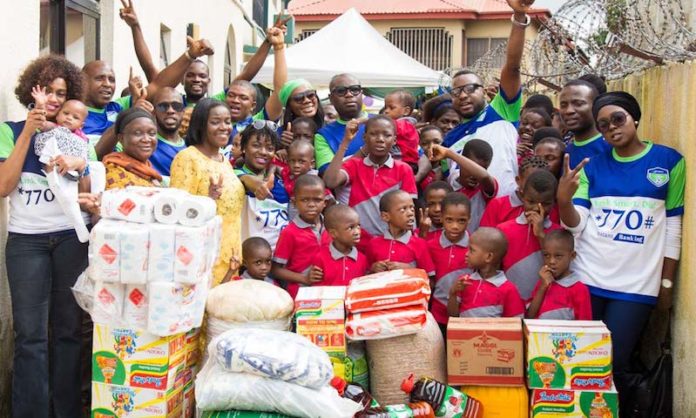 Fidelity Bank in collaboration with Yobe State government has donated food items to 150 people with disabilities in Damaturu, the Yobe state capital in fulfillment of its Corporate Social Responsibility (CSR) objectives.

The gesture was part of the Fidelity Helping Hand’s Programme (FHHP) aimed at supporting the vulnerable members of the community.

Highlighting the objectives of the programme, the Branch Leader, Damaturu, Kingsley Echefun in a statement explained that the Bank is very interested in both the financial and physical well-being of people living within its community.

He said: “This exercise is borne out of our compassion for people with special needs. As a bank, we believe that vulnerable households must be supported to enable them to live decently. That is why staff of Damaturu branch of the bank with the support of our colleagues at the head office, put together this donation.”

He commended the Yobe State government for providing an enabling environment to carry out such a gesture and disclosed that the Bank had executed similar initiatives in Bade and Geidam local government areas of the state.

On his part, the representative of the Yobe State government and the Executive Secretary, State Emergency Management Agency, Dr Mohammed Goje, commended the bank for keying into the priorities of the state government and urged other financial institutions and corporate organisations in the state to emulate the gesture.

The Chairman, Joint National Association of Persons with Disabilities (JONAPWD), Yobe State, Yawudima Barma said the beneficiaries cut across people with various disabilities including the blind, Deaf, Leprosy, persons with physical disability and those with spinal cord injuries.