Yahaya Bello, PWDs and the Love of Humanity  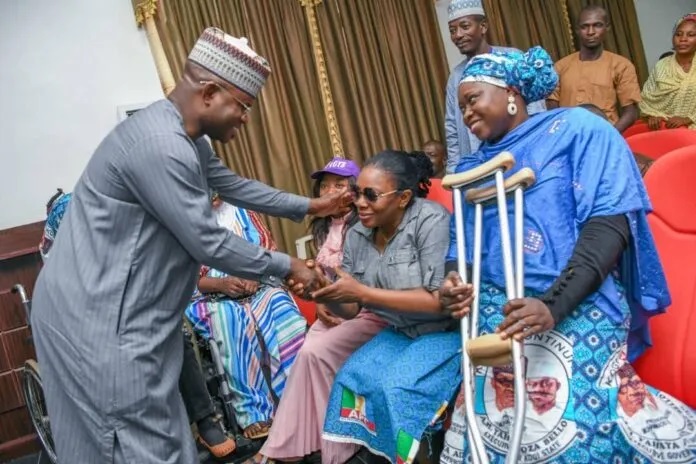 It is widely known that disability inclusion is an essential condition to upholding human rights, sustainable development, and peace and security. It is also central to the promise of the 2030 Agenda for Sustainable Development to leave no one behind. According to the United Nations, the commitment to realising the rights of persons with disabilities (PWDs) is not only a matter of justice; it is an investment in a common future.

In one of its reports, the UN disclosed that the global crisis of COVID-19 is deepening pre-existing inequalities, exposing the extent of exclusion and highlighting that work on disability inclusion is imperative. People with disabilities—one billion people— are one of the most excluded groups in our society and are among the hardest hit in this crisis in terms of fatalities.

In Nigeria and other developing countries, persons with disabilities are less likely to access health care, education, employment and to participate in communal affairs. In fact only few states have shown greater concern and commitment towards addressing the plights of PWDs.

While commending the Kogi state government on the pragmatic steps taken to address their challenges, the Executive Secretary of the State Office for Disability Affairs, Zacchaeus Michael, recently said Governor Yahaya Bello had shown over a period of six years that he is a leader who believes strongly in the ability of the disabled to contribute to national development because he believes there is ability in disability.

In a statement issued in Lokoja recently, Michael noted that Bello’s love for the PWDs was unparalleled as he had surpassed the yearly employment quota for the PWDs, adding that his efforts on their welfare and wellbeing were well documented.

He lauded the governor for the appointment of one of them as Senior Special Assistant, payment into the association’s account, the inclusion of Persons with Specialty into APC party executives, medical interventions and signing of the Disability right bill into law.

The lawyer urged Nigerians to cultivate habits that would lead to the reduction of street begging and unemployment among the PWDs through skills development, describing them as special people with passion for the development of the country.

He called on the government at all levels to give the PWDs a sense of belonging in appointments and employment opportunities because over half of all people with disabilities in low-income countries cannot afford proper health care.

Many people with disabilities also report being unable to afford the costs associated with travelling to a health service centre and paying for medicine, let alone the cost of paying to see a health service provider.

Disability is often not perceived as a health issue. Therefore, action is not taken towards disability inclusion in the health sector, which is also often overlooked in national disability strategies and action plans to implement and monitor the CRPD.

People living with disabilities have had relentless advocacy for inclusiveness in equality within our society which includes: Full access to the Environment (towns, countryside & buildings), An accessible Transport system, Technical aids and equipment which are all part of the disability right law signed by President Muhammadu Buhari.

Meanwhile, it is necessary to point out that PWDs are not only crippled, especially the beggars we see on the streets. They include other categories of people with different types of disabilities. Some have vision impairment, deafness, mental health conditions, intellectual disability, acquired brain injury etc.

Governor Bello is one of the most PWD-friendly governors in the country. In fact, in the history of the state, PWDs have never had it so good. He operates an open door policy, gives a listening ear and holds regular meetings with leaders and members of the PWD associations, both at state and national levels. And whatever requests they make, he grants them on the spot.

President Buhari had signed into law the Discrimination Against Persons with Disabilities (Prohibition) Act, 2018, which according some activists has transformed PWDs from “nobodies” to “somebodies.”

Apparently, Governor Bello’s milk of human kindness is immeasurable. This governs his priorities, his decisions and actions. The PWDs in Kogi state are living witnesses of his soft heart. They couldn’t have wished for a better governor.