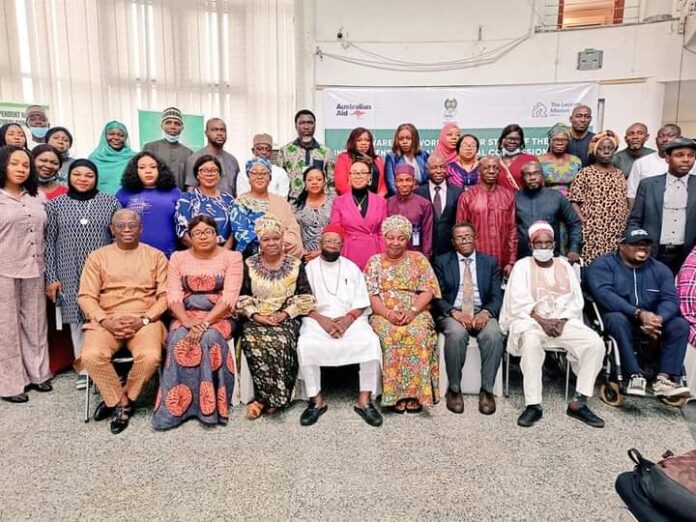 The Leprosy Mission Nigeria (TLMN) in collaboration with INEC organized a One Day Workshop to create awareness among INEC staff on understanding Leprosy.

The event supported by Australia Aid was geared towards getting the Commission’s staff educated on Leprosy as well as mobilize Persons With Leprosy to participate actively in the 2023 general elections.

The One Day awareness workshop for INEC staff with the theme: Understanding Leprosy took place on Monday 26th September, 2022.

“Despite this advancement, Leprosy is still strongly associated with stigma, so much that it has become a metaphor for stigma, for example, Persons with Leprosy are often referred as Lepers. They are better referred as Persons With Leprosy”

Speaking further, he said that the difficult they faced today is due to stigma and discrimination which has made them to live in shame, having low self esteem, lack educational and economic opportunities, eviction from their houses, restrictions from participation in societal activities and social isolation.

“Persons with Leprosy are either receiving poor treatment or lack access to treatment”.

He called for more acceptance and inclusion of Persons With Leprosy in the scheme of things because they are part and parcel of the society.

He also said that they should be made to be part of the electoral process.

A representative of Executive Secretary of National Human Right Commission, Mrs Fidelia Osemeata Oroh, in her goodwill message said that based on article 29 of UNCRPD, Section 30 of National Disability Act and 2022 Electoral Act which made the inclusion of PWDs in electoral process as a matter of right.

“Any attempt to deny them of these rights amount to violation of human rights”.

Speaking further, she said that the National Human Rights Commission is committed to protect and promote human rights and they would be willing to partner with The Leprosy Mission Nigeria and INEC and they would want the process touch every state in Nigeria so every person with disability would be carried along in the spirit of Leave No One Behind.

The Head of Programs and operations, TLMN, Mr. Pius Sunday Ogbu representing The National Director, Sunday Udoh in his speech said that Leprosy is no longer a death sentence although Nigeria is still report over 2000 cases annually. He informed that Leprosy is curable because the treatment is available.

He informed that TLMN are involved in numerous interventions which ranges from education, production of assistive devices, health services etc but as part of advocacy to enhance inclusion of persons with Leprosy, they are engaging INEC to promote the participation of PWDs in this electoral system.

“I want to use this opportunity to call for total mainstreaming of Persons With Leprosy and PWDs general in the electoral process and committed to assist government towards enhancing the inclusion of PWDs in all the future elections.

Ndidi Okafor, Deputy Director, CSO division, INEC who represented Prof Kunle Ajayi, National Commissioner and Chair OPC, said that the workshop is one of the many ways the commission has adopted to prepare its staff to deliver its mandate of inclusive election. She said that over time, INEC has allowed global best practices in stakeholders engagements.

She also said that INEC remains committed towards ensuring access and inclusion of PWDs in the electoral process and it is the duty of INEC to ensure every citizens has equal right in accessing electoral process.

Speaking further, she said that INEC is engendering Inclusive Democracy by ensuring that the process allows participation of all irrespective of sex, religion, tribe and social strata.

“Over time, the commission has engaged different stakeholders to strengthen the participation of persons with disabilities in the electoral process”

She informed that the Commission through its policies and guidelines continually addressing issues that will hinder the effective participation of PWDs in the electoral process.

She thanked TLMN for the initiative to build the capacity of INEC on understanding Leprosy and urged them to do more in the area of the commission quest to mobilize PWDs to participate fully in 2023 elections.

Samuel Bassey, Assistant Director, Youth who represented Mrs. Lakunuya Dorothy Bello, Ag. Director, Gender and Inclusivity Dept, INEC in his goodwill message recognized that it is the right of PWDs to have access to electoral process based on article 29 of UNCRPD. He acknowledged the contribution of TLMN and recognized that the workshop will provide opportunity for INEC Staff to know more about mainstreaming Persons with Leprosy. It is also important to note that different forms of disability requires different or peculiar assistive devices to ensure that they have access to electoral process.

Comrade Agbo Christian, Secretary, JONAPWD FCT, speaking on behalf of PWDs commended INEC for mainstreaming PWDs in the electoral process as well as Influencing political parties to create more access for the participation of PWDs.

“Today, we have 11 persons with disabilities standing election in 2023”

He also commended TLMN for the initiative to enhance inclusion of Persons With Leprosy in the electoral process.

He pointed out the issues of placement of Cubicles and Ballot Boxes which he suggested that they should be placed at open spaces or where there would not be any barriers.

He also pointed out the issues of sign language interpreters at the polling units to enhance communication of the Deaf on election day.

At the workshop of the participants were taken through the history, Causes, Symptoms and Treatment, Ending Leprosy Discrimination, Stigma and Prejudice by Mr. Pius Ogbu and Technologies in the electoral Process: The Use of BVAS.

Also in attendance was Mr Jonathan Charge de Affairs Australian High Commission, some persons with leprosy and other persons with disabilities.