HomeNEWSVOTE-ABILITY Campaign: IFA to engage INEC, other Stakeholders to increase Voters with...
NEWS

VOTE-ABILITY Campaign: IFA to engage INEC, other Stakeholders to increase Voters with Disabilities in 2023 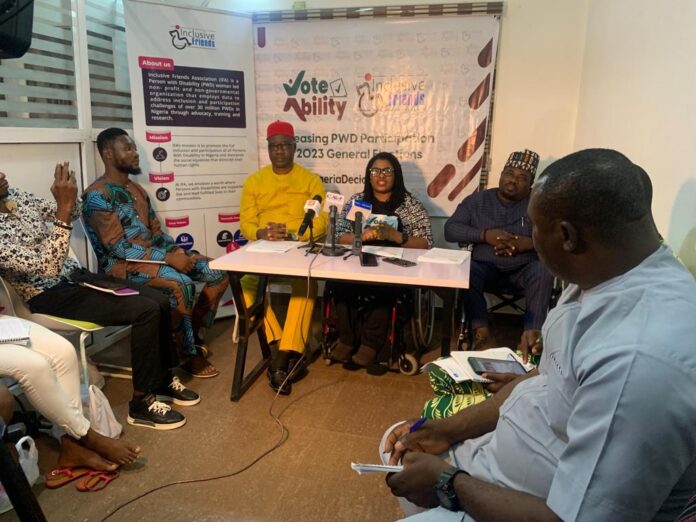 The Campaign was launched in a press conference organized by IFA on Tuesday in Abuja.

The Executive Director, IFA, Grace Jerry in her speech said: “According to “C” part in the preamble of United Nations Convention of Rights of Person With Disabilities (UNCRPD), it Reaffirming the universality, indivisibility, interdependence and interrelatedness of all human rights and fundamental freedoms and the need for persons with disabilities to be guaranteed their full enjoyment without discrimination”.

She said that It is on the principle of this UNCRPD that the Inclusive Friends Association (IFA) is launching the campaign to promote the rights, increase electoral participation and well-being of Persons with Disabilities (PWDs) in all spheres of society and development with core emphasis around electoral issues.

According to her, the VOTE-ABILITY Campaign will advocate for PWDs inclusion by engaging all election stakeholders at various level to be accountable on their statutory responsibilities.

“These stakeholders include but not limited are; the electoral umpire Independent National Electoral Commission (INEC), Security agencies, Political Parties, Media agencies, citizens and with concentration on the community of Persons with Disabilities (PWDs)”.

She informed that VOTE-BILITY Campaign will also serve as the key to holding government accountable to delivering on promises and constitutional responsibilities.

“It is obvious that there have been improvements in electoral process and especially around the achievements of the Inclusive Friends Association (IFA) which includes the introduction of the Braille Ballot Guide (BBG) that enables blind voters vote independently and Form EC 30E PWD poster that provide guidance for deaf voters”.

“However, in spite of the provision of PWD voting assistive materials provided for PWDs, one cannot over emphasize the need for continued engagement as there are still challenges that limits the participation PWDs in the electoral process”.

She pointed out the challenges faced during the Pre-Election phase which were registration of PWDs during the past Concluded Voter Registration (CVR), inaccessible location for party manifestoes, high cost of nomination form in political party excluded PWDs from participation and low rapportage from media agencies who focus of the big names among political candidate.

“The attitudes of ad-hoc staff towards PWDs on election day depicts inadequate training before deployment and the low level capturing of the PWD data in the Form EC40H”.

Jide Ojo, a board member of IFA said that VOTE-BILITY Campaign will engage the three phases of election which are the Pre. Election Day and Post-Election phase.

He called on INEC to consider 5% employment opportunity of PWDs in he recruitment of ad-hoc staff in compliance to Section 28 (1) and 29 of the Discrimination Against Persons with Disabilities Prohibition Act 2018.

He implored INEC to collaborate with Organization of Persons With Disabilities during the training of ad-hoc staff especially on the PWD component.

He said; “The VOTE-BILITY Campaign will access the implementation of Section 54 sub section 1 and 2 Nigeria Electoral Act 2022 to ascertain compliance as provided in the Act such as Braille, large embossed print, electronic devices, sign language interpretation, or off-site voting in appropriate cases”.

He urged the media to assist the VOTE-BILITY campaign to succeed as IFA and OPDs will be there to consistently engage and provide relevant information on PWDs to them.

“IFA will engage security agency in training their staff on the proper ways of engaging PWDs during elections processes”.

“The Campaign will engage with civil Society organizations and other OPDs on Voter and Civic Education so as to reduce Voter-Apathy especially within the disability community”.