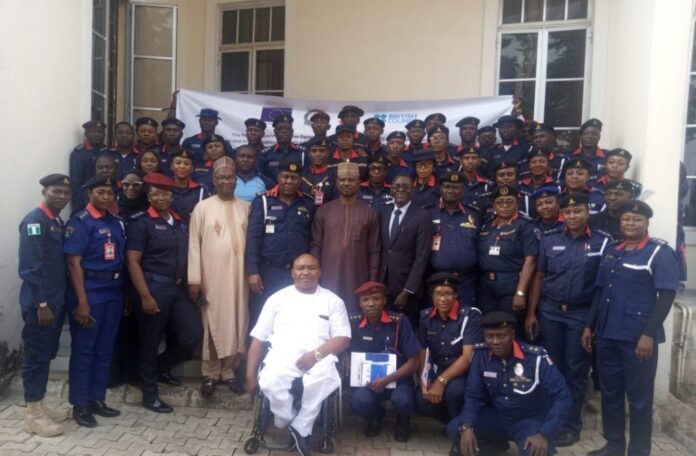 The National Commission for Persons with Disabilities (NCPWD), in collaboration with Rule of Law and Anti-Corruption (RoLAC) Programme, has commenced the training of 60 Disability Desk Officers of the Nigerian Security and Civil Defence Corps (NSCDC).

The Executive Secretary of NCPWD, Mr James Lalu on Thursday in Abuja, appreciated the commitment of the NSCDC for providing such an opportunity to help Persons with Disabilities (PWDs).

The programme was organised by NCPWD in collaboration with RoLAC, NSCDC and sponsored by The European Union and British Council.

“It is significant for us to have this collaboration with this office. PWDs has been facing discrimination, even within the disability community.

“We believe that your organisation is one of the largest security agencies in the country and it is close and friendly with the people.“We want to see how this collaboration will transform into access to justice for PWDs in Nigeria. It is very key to us.” Since its creation in 2020, the NCPWD has been receiving so many complaints on discrimination and abuse from disability community in every parts of the country.

“As you are fighting vandalism of oil pipeline and other critical infrastructure, we want you to transform such and fight discrimination against PWDs in Nigeria,” Lalu said.

Meanwhile, the Commandant General of the NSCDC, Dr Ahmed Audi, said the corps was aware of the UN Convention on the Rights of PWDs and the Prohibition and Discrimination Against PWD Act.

According to him, the Act aims at proper integration of PWDs, to cater for their education, health care and civil needs.

On Oct. 26, I granted the approval of the establishment of PWDs Special Desk Office at the Headquarters and 36 states of the federation and the Federal Capital Territory.

“After today’s inauguration, we shall be attending to special matters relating to PWDs as in quick response to any form of discrimination or abuse in any of our commands throughout the federation.

“The induction training by NCPWD and RoLAC is to make the PWDs Duty Desk Officers to know and do their work diligently. They would be supervised by State Commandant.

“Their responsibility shall be the adequate protection of the rights and privileges of any citizen with any form of disability,” Audi said.

The News Agency of Nigeria reports that Audi was represented at the event by Deputy Commandant General in Charge of Administration, Mr Zakari Ningi.

NAN reports that high point of the event was the unveiling of the emblem of PWD Duty Desk by Lalu, Audi, Plang and other officials from the Ministry of Interior and Humanitarian Affairs. (NAN)