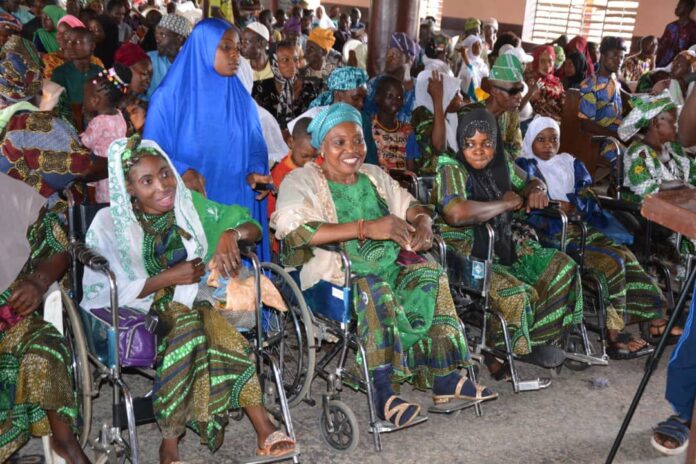 Three years after the Disability Bill was signed into law by President Muhammad Buhari Nigerian women with disabilities have continued to struggle with some of the issues provided for in the Act, ENE OSHABA writes.

In January 2019, President Muhammad Buhari assented to the Discrimination Against Persons with Disabilities (Prohibition) Bill 2018. The Act prohibits all forms of discrimination on ground of disability and imposes a fine of N1 million for corporate bodies and N100,000 for individuals or a term of six months in prison for violation.

Senior Special Assistant to the President on National Assembly Matters (Senate), Mr. Ita Enang, in a statement after the signing of the Bill into law said the Act provides for a five-year transitional period within which public buildings, structures or automobile were to be modified to be accessible to and be usable by persons with disabilities, including those on wheelchairs.

The statement reads in part: “The Act further provides: “Before erecting any public structure, its plan shall be scrutinized by the relevant authority to ensure that the plan conforms to the building code.

“A government or government agency, body or individual responsible for the approval of building plans shall not approve the plan of a public building if the plan does not make provision for accessibility facilities in line with the building code.

“An officer who approves or directs the approval of a building plan that contravenes the building code, commits an offence and is liable on conviction to a fine of at least N1 million or a term of imprisonment of two years or both.”

The presidential aide said discrimination was prohibited in public transportation facilities and service providers are to make provision for the physically, visually and hearing impaired and all persons howsoever challenged.

“This applies to seaports, railways and airport facilities. The rights and privileges include education, healthcare, priority in accommodation and emergencies.

“Furthermore, all public organisations are to reserve at least 5 per cent of employment opportunities for these persons. The National Commission for Persons with Disabilities is also established in Section 31 with executive secretary as the head,” he said.

Three years on, women with disabilities continue in lamentations in the old order as not much visible sign of the implementation of the Act which should improve on the wellbeing of people with disability, especially women who most times suffer more the brunt.

The Founder, Advocacy for Women with Disabilities Initiative, Patience Ogolo Dickson, while fielding questions from journalists in Abuja said that the Disability Bill which was signed into law aims to address the issue of discrimination among PWDs. She, however, decried that PWD were still experiencing huge discrimination in Nigeria.

Dickson, who lauded the commitment of the federal government in signing the bill, regretted that implementation of the law has remained a mirage across the country.

According to her, PWDs still experience barrier’s in accessing public and private facilities, also in access to transport, education, health care, credit facilities and others, these barriers are even more.

“The federal government is doing their bit trying to ameliorate these gaps; recently the present administration signed the National Disability Act into law which has also made provision for the National Commission for Persons with Disability saddled with the responsibility of advancement of issues of people with disabilities.

“Having a law is a right step in the right direction, but we need to be more proactive in the implementation of the National Disability Law to ensure compliance to bridge the gaps in discrimination and marginalisation often experienced by people especially women with disabilities in all spheres of the society,” she stated.

Recalling earlier years when the barriers were worse due to poor enlightenment and advocacy, she noted that not much has been achieved to ameliorate the plight of the general wellbeing of PWDs today emphasising that they still face a whole lot of discrimination.

“I come from a humble background and my family contributed immensely to what I am today and it gives me joy that I have not only been able to build myself but other people like myself in the disability community.

“Growing up was great because of the show of love from my family, on the other hand; I and my family experienced negative societal and attitudinal discrimination in the form of stereotypes, exclusion as a result of ignorance, negative mindsets and perceptions mostly working against the disability community,” she stated.

Similarly, the Founder and Chief Executive Officer (CEO), Cedar Seed Foundation and the Network of Disabled Women, Lois Auta, said the barriers still glares them in the face amidst all efforts to prove their capabilities.

She recalled when she contested for a political position, stating that the challenges were triple for women and sadly slim chances for winning.

This, she said, made her enrol into the School of Politics,  Policy and Governance to enable her learn more on how to go about her political ambition as a woman with disability, with the aim of breaking the stereotypes.

“I enrolled into the School of Politics,  Policy and Governance (SPPG) which helped to shape and redefine my plans in Politics and my manifesto have undergone review and rebranding in preparation for the 2023 elections  but the barriers women face in politics affects women with disabilities more.”

Also, Auta-Udonkanta, who had contested for the House of Representatives, Abuja Municipal Area Council (Bwari constituency) on the platform of Accord Party in 2019 but lost to the People’s Democratic Party (PDP) Candidate, Micah Yohanna Jiba, shared her experience.

She revealed her ambition to join the race for the House of Representatives in the 2023 general election which has been a tight battle for women.

“I want to challenge the status quo, I want to make changes, I want to change the mindsets of Nigerians to be inclusive even though the political system is not favourable for women,” she stated.

On her part, the National President, Deaf Women Aloud Initiative (DWAI), Hellen Beyioku-Alashe, noted that the Disability Act gives deaf women the right to access in every sector including the education, health, judiciary, and everywhere.

She, however, regretted that not been much improvement have been achieved three years after the law was passed.

The initiative president decrying the fact that deaf people and PLW in general have continued to be discriminated against.

“As a woman, I don’t have access everywhere. We have been discriminated against for so long and we are demanding our right to life. We are always victims of death because there are no interpreters between us and doctors.

When we go to the hospital the doctors touch us like babies to know what is wrong with us because there are no interpreters at the hospitals.

“Even when there is information being passed we cannot hear nor understand because even when we watch the television there are no interpreters. So, we don’t know what is going on around us.”

Giving voice to voiceless women and particularly women with disability to enable equal representation of citizens is a tasking advocacy to engage in, considering the patriarchal society like Nigeria.

The United Nations (UN Women) taking the lead in advocacy over the years has brought to the limelight the need to ensure active participation of people with disability into intergovernmental meetings and consultative processes including inter-agency and other multi-stakeholders platforms to promote their rights as well has attract interventions to them to live a more comfortable life free of discrimination and marginalisation.

The UNWomen has maintained that discrimination of people with disability could lead to their lower economic and social status; increased risk of violence and abuse, including sexual violence; gender-based discriminatory practices; and limited access to education, health care (including sexual and reproductive health), information, services, justice, as well as civic and political participation.

“These barriers hinder their full and effective participation across the humanitarian-development continuum, including during pandemic and in post-conflict and transition settings,” its online report stated.

It is as a result of these myriad of challenges that all stakeholders in the women agenda are encouraged to keep up the struggle while hoping that the narratives will change for the better.

Founder, Advocacy for Women with Disabilities Initiative while building on established observations, suggestions and recommendations to improving the lives of women with disabilities advised that they should seek for inclusion in service delivery because there was mostly no access for them in the various spaces.

“For the deaf, it is really so sad that communication barrier exists, you can hardly find a sign language interpreter(s) in many public and private sectors to ease the communication and proffers inclusion for the deaf.

“Until we begin to prioritize issues of people with disabilities in government systems and processes, then can we have a more inclusive society that leaves no one behind.

“People with disabilities have faced a lot of discriminations in their life time and this has affected more or less the way we behave and that has affected our lives as well.

“It is not easy with PWDs in all spheres of life. As a person that has been fronting the issues of women with disabilities, it has not been easy carrying my community along but it is a passion that we have to ensure that we are not disappearing in the space,” she said.

Speaking further Dickson said, “We try the much we can to advance issues that affects women and girls with Disability and this has been on for the past 14 years.

“One of the challenges that we have come across in our work is charity based, many persons with disabilities still see themselves to have everything they want free of charges.

“Many of them still believe that everything is based on charity so it is difficult to actually work with people that have that kind of mindset especially when you are running an organization that is none profit.

“Many of our community members are also not educated and that is a big challenge, understanding issues and having capacity to do things, having the ability to lead and be led is a big challenge so, education and exposure can actually make difference if persons with disability acquire the basic education.