Profile of Chief Felix Asikpo Edet, a persons with disability who declared interest to contest for Cross River State House of Assembly 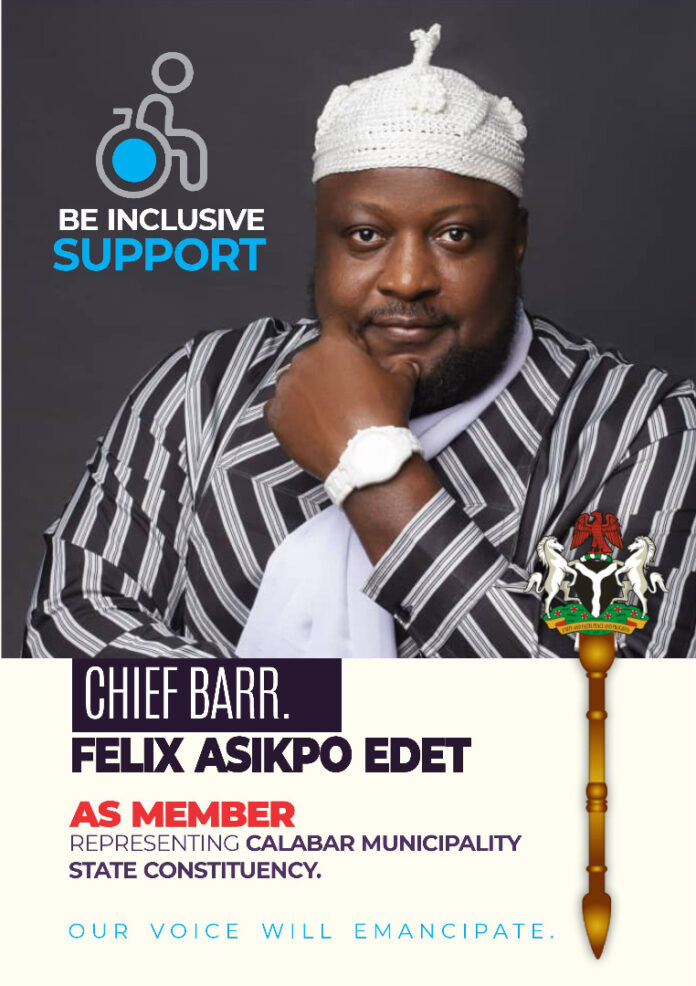 Felix was born a healthy and normal child. Sadly, tragedy struck at the age of 2 when he contracted poliomyelitis. He would go on to suffer a paralysis of his left limbs. However, polio could not keep the young Felix down as he learnt early in life to be resilient. He attended Madonna Montessori Nursery School and Hope Waddell Training Institute for his primary education and secondary education, respectively. Both schools are in Calabar.

He then applied to study Law at the University of Calabar, Calabar and was admitted. He would go on to bag his Bachelor of Laws degree in 2005 and would be called to the Nigerian Bar in 2010 after his successful completion of the Bar Part II Course at the Nigerian Law School, Abuja Campus. He is now pursuing a Master of Science degree in Global Human Resource Management at the National Open University of Nigeria (NOUN).

Felix participated in the National Youth Service Corps scheme between 2011 and 2012. However, due to his physical challenge, he was deployed to his state of origin and was posted to the Chambers of Innocent C. Ovat, for his place of primary assignment. There, he was appointed Secretary to the Head of Chambers. After his completion of youth service in 2012, he was employed by the law firm, the Advocates Chambers in Calabar where he was appointed the Litigation Secretary. From 2013 to 2014, he has been the Head of Department (Soliciting) in the law firm. In 2015, Felix established his Asikpo and Associates, which he seats as a Principal partner of the Chambers.

Felix is a talented solicitor who attends to about fifteen clients of the firm on a weekly basis and has settled and perfected numerous deeds. A holder of a proficiency certificate from the Association of Arbitrators of Nigeria, he is versed in alternative dispute resolution and has an impressive portfolio of cases that he has helped resolve amicably. He also mentors and supervises a number of lawyers in his Chamber and is an astute manager of people. He is taking courses at the Chartered Institute of Personnel Management to enable him improve his already remarkable managerial acumen.

He loves to give back to the society and has volunteered for the National Human Rights Commission. He also volunteered his research skills to One Sky Nigeria. Being a physically challenged person himself, he has an intimate knowledge of the plight of the physically challenged in the society and is the founder of the initiative, Felix Edet Free Legal Services for the Physically Challenged, through which he takes care of the legal needs of scores of persons in the society living with disability.

He is also the co-founder of Feng Nation, a prominent member of the civil society in Cross River State. The organization carries out the monthly feeding of street children in Calabar, with the number of children now at three hundred. Meanwhile, plans are at an advanced stage to add free medical services to the humanitarian offerings of the organization.

Two years ago, Felix was conferred with a chieftaincy title by his people in recognition of his numerous contributions to the development of not only the Kasuk Qua Clan but also the society at large. He holds the mgbe traditional title of Ntoe Ebongho, Osam’i Mgbe Kasuk Qua Clan in Calabar Municipality. He is a member of his clan’s council and the Legal Adviser to Ntoe Patrick Agbo Edem, Clan Head of Kasuk Qua Clan 1. He is also a Legal Adviser to several companies including Faithplant Global Services Limited, arguably the most functional construction company in Cross River State.

He is married to the beautiful, elegant, stylish and loving Mrs. Utang Felix Asikpo-Edet, a social worker with whom they founded Feng Nation. His marriage is blessed.

Chief Felix Edet does not believe in being on the political sidelines and seeks to represent the good people of Calabar Municipality at the Cross River State House of Assembly. He believes strongly in the emancipation of every person with disability in the society through friendly government policies and laws and their faithful implementation. He seeks political office to advocate for the betterment of the lot of persons with disabilities.

He strongly disagrees with the practice of giving crutches and stipends to persons with disabilities as a means of empowerment, seeing these as basically tokenistic. As he wont to ask: “Why do for us what we can do for ourselves”? What he seeks is sustainable empowerment, not gift items that merely make disability a charity case and often do not last.

But he will by no means be a representative of only those with disability since his constituency also teems with persons without physical disabilities. He will pursue sustainable and people-friendly policies. In terms of accessibility, quality of contributions on the floor of the Cross River State House of Assembly, and the benefits of good governance in general, he promises to dramatically change the face of representation in the constituency.

Ladies and gentlemen, we present to our amiable, resilient and people friendly and amiable Cross Riverian, Chief Felix Asipo

Setting standards for PWDs: My story, by Corps member