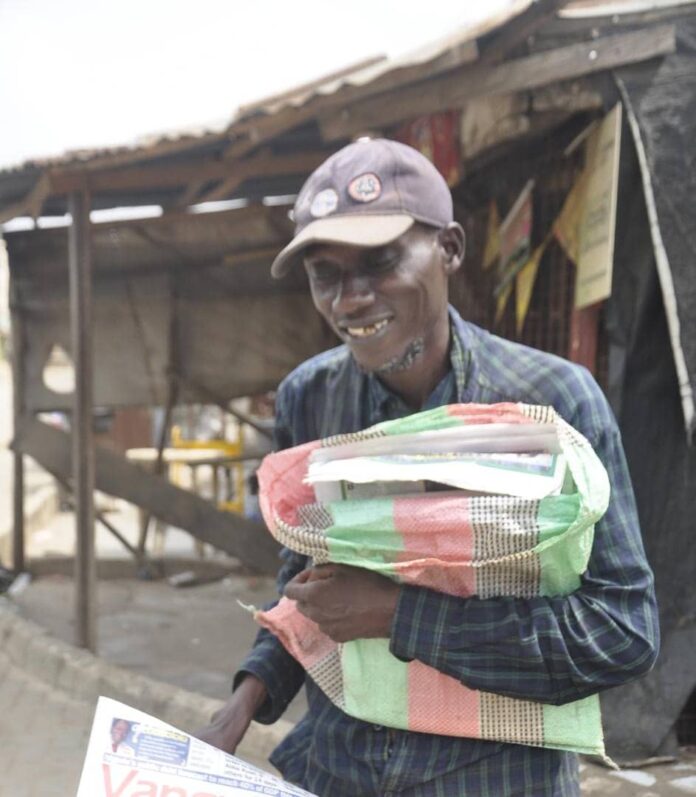 “Some have eyes but cannot see, some can see but have no eyes,” are the words on the starting lines of a poem recited…

“Some have eyes but cannot see, some can see but have no eyes,” are the words on the starting lines of a poem recited in kindergarten class in the early 90s.

Sanusi Hakeem Olukorede, a blind newspaper vendor in Lagos, was probably a child in that era. But presently, the words of those poem resonate in him. Although visually impaired, Olukorede is not limited. On a daily basis, he struggles to eke out a living despite the hazards.

Olukorede was not born blind. As a matter of fact, he used his carpentry skill for survival until glaucoma cost him his sight years ago. Many in his shoes would have opted for begging.

Two weeks ago, a 48-year-old beggar, Hadiza Ibrahim, was nabbed with N500,000 and a $100 bill in Abuja. Malam Sani Amar, a Director at the Federal Capital Territory Administration (FCTA), who led the team that arrested Hadiza described her as a die-hard beggar. The director said while the beggar accumulated money over the years, she failed to invest it.

“She knows what she is doing, she can differentiate between right and wrong,’’ he said.

Amar said his team had nabbed Hadiza several times within a decade, adding that she was socially deformed not mentally.

Back to Olukorede, who could have used lost of sight as a licence for begging, but chose a more honourable path. He came into limelight when a Twitter user uploaded a video of him, wandering around Egbeda in Alimosho Local Government Area of Lagos, with copies of newspapers.

In a chat with Daily Trust, the vendor recalled with nostalgia how he got blind at his furniture workshop about five years ago.

From his residence at Egbeda, he strolls around the vicinity to sell newspapers. He said many family members had tried to stop him due to his condition but he didn’t get discouraged because he was not ready to become a liability to the family.

More so he also has three children to feed, he narrated.

Although, he might be blind, his instinct is still intact and that is what he has been applying to move about within the community to ply his trade.

To the chagrin of the people who encounter him on a daily basis, he has mastered his route as he walks around the vicinity without any aid.

He said, “I used to be a furniture maker. I became blind about four, five years ago in my workshop. I was told what happened to me was Glaucoma and it could not be operated upon.

“Since then I have stopped going to the furniture workshop and become a newspaper vendor. This is what I ventured into after losing my sight.

“I have been advised to stop selling newspapers around because of my condition, but I don’t think I am ready to stop because I don’t want to be a liability on my family. I also have children to cater for. I don’t want relatives and friends to shoulder my responsibility.”

His former colleague at the furniture workshop, Ntiedo Ekefre, who spoke with our correspondent, described Olukorede’s condition as sad, soliciting assistance from well-meaning Nigerians. Ekefre said it is possible for the vendor to regain his sight, if he gets assistance.

He said, “He came to work one day, about four to five years ago and complained about his eyes. That was what happened, since then all efforts to regain his sight have proved abortive.”

As we brought the conversation to a close, Olukorede continued his journey in search of the family’s next meal.

Profile of Chief Felix Asikpo Edet, a persons with disability who declared interest to contest for Cross River State House of Assembly

Setting standards for PWDs: My story, by Corps member