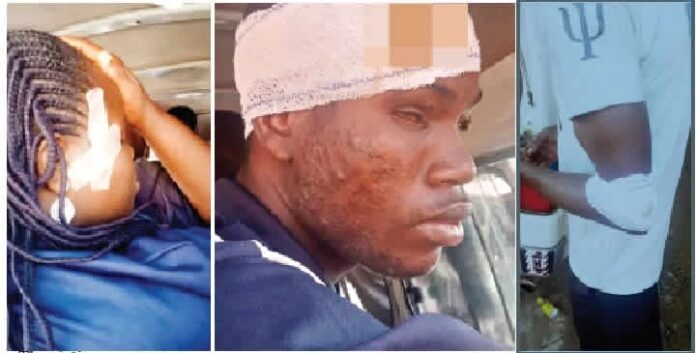 Members of the Association of Technology Inclined Visually Impaired Persons of Nigeria have accused security guards attached to the Federal Civil Service Commission, Abuja, of brutalising them during a peaceful protest.

Pictures and videos obtained by PUNCH Metro showed the moment the protesters were dragged by the guards and beaten.

Our correspondent gathered that members of the group held the demonstration to persuade the commission to heed their request for employment.

The President of the association, Tolulope Aluko, said they had been seeking employment from the commission since 2020.

He said the group also approached the Office of the Secretary to the Government of the Federation, which wrote a letter to the Chairman of the Federal Civil Service Commission on their behalf.

He said, “We visited the commission in July last year and we were told to come back. We came back again on April 11, but they didn’t answer us.

“When we came today (Tuesday), they said we should come back, but we refused to leave. We started protesting peacefully. The press came, but immediately they left, the security guards started beating us and destroyed our things.”

Aluko noted that among their members seeking employment were first degrees, masters, and PhD holders.

A victim, Akinyemi Akinola, told PUNCH Metro that they only wanted the government to help them due to their condition.

“We can’t drive commercial vehicles. What we can do is to get educated and see how we can contribute to the country. That’s what we came here to do only for them to wreak havoc on us. Some of us have been hospitalised. Our phones were smashed and taken away so we couldn’t record,” he added.

He said the security men shot three times into the air to scare them before picking the shells to erase any evidence.