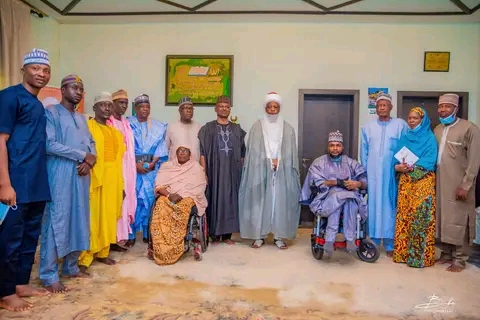 The Executive Secretary National Commission for Persons with Disabilities, Mr. James David Lalu has said that religion plays active roles in the Nation building as well as imparting hopes and confidence amongst the susceptible in the society, including Persons with Disabilities and would be a key to the success of the forth coming Disability summit being planned by NCPWD.

In a press release signed by Mbanefo JohnMichaels I, the head Media and Publicity Unit, NCPWD, the ES made this disclosure at the Sultanate Council Sokoto during a courtesy visit to the Sultan of Sokoto, his Eminence, Muhammad Sa’ad Abubakar III, on Monday 15th August, 2022.

In his address, the Executive Secretary reiterated his gratitude to President Muhammadu Buhari for establishing the Commission and for giving a voice to Persons with Disabilities in Nigeria. He further stated that Mr. President’s resolve to take hundred million Nigerians out of poverty in 10 years’ time also means that Persons with disabilities are now included in national planning.

However, Lalu disclosed that the Commission is planning a national summit whereby burning issues on the inclusion project of PWDs will be at the front burner. He also entreated the royal father for a full participation of sacred and religious councils which he explained would add value to the discourse on the Disability inclusion project.

The ES as well expressed his gratitude to his Eminence for his interest in the well-being of PWDs, especially his kind gestures to the community during Islamic festive periods.

Responding to the visit, his Eminence, Muhammad Sa’ad Abubakar commended Lalu for his achievements within a short period of his engagement. And stated that his appointment is well suited and could be described as a round dowel in a round hole. He further assured of the full participation of his consulate in the upcoming National summit.