HomeNEWSCitizens With Unique Abilities In Politics Vows To Mobilize Support For Sen...
NEWS 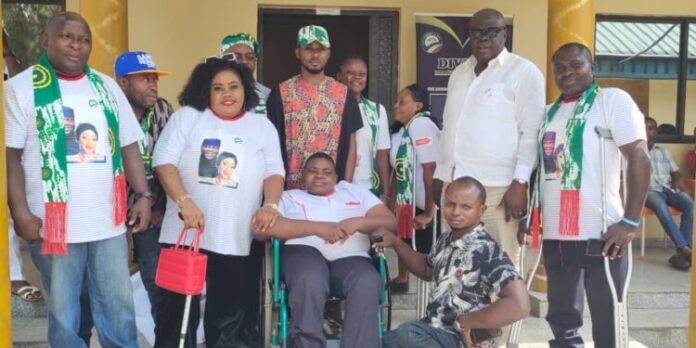 The leadership of Citizens with Unique abilities in politics in Cross River State has vowed to mobilize support for Sen. Sandy Onor in the forth coming gubernatorial election.

The group made the disclosure when she paid a courtesy call at the Campaign office of the People’s Democratic Party (PDP). The group decried abandonment by the present administration as they reminisced on the good days of PDP administration in the State when the group was part of decision making processes to the extent they got elective offices.

The leadership of the group pledged to mobilize their members across the state to ensure Sen Sandy Ojang Onor becomes Governor of Cross River State in order to bring back the glory days.

The group was received by the Director General of the Cross River State PDP Campaign Council, and former Deputy Governor, Barr Effiok Cobham who assured the group that whatever confidence they have in the PDP and Senator Onor is not misplaced.

Cobham averred that “the challenges facing Cross River State today are not those of geography, but are rather cross cutting problems that are not confined to a particular geography such as hunger, unemployment, lack of productivity, poor access to basic infrastructure, poor access to quality education and the absence of leadership as well as lack of focus by the government of the day that has translated to severe poverty on the populace.

He thanked them for believing in project “Reclaim Cross River State” and on behalf of Senator Onor promised not to disappoint them when elected Governor.