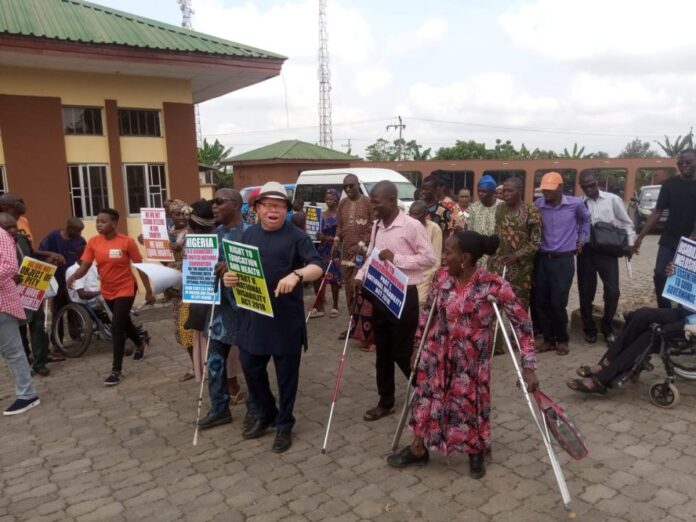 Persons with disabilities in Osun State, on Wednesday, staged in a peaceful protest over the failure of the state government to domesticate the National Discrimination Against Persons with Disabilities (Prohibition) Act in the state.

The protesters, under the umbrella of Joint National Association of Persons with Disabilities (JONAPWD), Osun State Chapter, converged at the Local Government Service Commission, Abeere, around 8:30am and demonstrated to the Governor’s Office at Bola Ige House to express their displeasure to the governor’s delay in giving the disability Act life in the state.

While chanting solidarity songs with display of placards bearing different inscriptions, the PWDs including the virtually impaired, deaf, dumb, those on crutches and wheelchairs, albinos among others, sat at the entrance to the office of Governor Gboyega Oyetola and that of his deputy, Benedict Alabi after they arrived the premises around 9:45am.

They said they wouldn’t leave the place unless the governor, who was said not to be around as at the time of their visit, or other government functionaries attend to them with assurance of granting their request. A team of policemen was with the protesters to ensure orderliness.

Leaders of the PWDs who took turns to address the gathering. They commended the governor for what he has done in the state but emphasised the need for him to sign the Disability Act for its domestication in the state before Oyetola’s administration winds-off in the next few days. They accused the state Attorney General and Commissioner for Justice, Oluwafemi Akande of sitting on the bill and causing the delay in its domestication.

Speaking, Aghanti Smith, the General Secretary of Osun JONAPWD, said the domestication of the Disability Act which was signed into law by President Muhammadu Buhari in 2019, would guarantee the rights of PWDs and provide them with opportunities that would make them equal with those without physical challenges.

Appealing to Oyetola to show understanding by assenting the Act in the state, Smith said over 14 states in Nigeria had domesticated the Act.

He said, “The purpose of organising this peaceful protest is to tell the Osun State Government that we want their names to be written in gold. Our counterparts in many other states in Nigeria have started enjoying the dividends of this disability law. But in Osun, it’s not like that. We have written so many letters, we have talked to them privately and publicly but no response. That’s why we gathered ourselves for this peaceful protest so that our voices will be heard. We want the governor to sign the bill today. We are appealing to the state government under the leadership of Alhaji Gboyega Oyetola to allow this bill to sail through.”

“PWDs who are being abused will have a sigh of relief. Those who are being marginalized will get justice. We are tired of seeing PWDs unemployed, begging for alms and forsaken in the society. The Disability Act will put a stop to all these challenges. We want this bill to be attended to today so that we can also partake in governance by voting without hindrance and also be voted for.”

After about two hours of staying under the scorching sun at the frontage of Oyetola’s office, the Head of Service of the state, Olowogboyega Oyebade, came out of his office to attend to them and assured them that the disability bill would be presented before the governor at the state executive meeting next week.

While reeling out Oyetola’s achievements especially for the physically challenged in the state, Oyebade said the current administration had prioritised the needs and welfare of the PWDs and debunked insinuations that the Attorney General was intentionally dragging efforts on the Act.

Addressing the PWDs, he said, “I want to thank you on behalf of the governor of the state Mr Adegboyega Oyetola. Concerning your request, I want to tell you that the present administration in the state has taken the affairs of the people that are having certain disabilities very seriously.

“You will recall that during the recruitment of teachers, the governor gave a directive that all people that are one challenges or the other in terms of disability that applied for teaching appointment should be given automatic employment, and I want to confirm to you now that all of your people took part in the interview section for teaching in the state. All of them have been given their letters of appointment and their salaries are paid.

“This is a directive given by Mr Governor and I want to tell you that you are an institution in the state stretching across all the senatorial districts and you have been given the type of attention you deserve.

“This is part of the achievements of the present administration and I must let you know that some of your people that are sick and they sought for financial assistance from Mr Governor, were given the attention they deserve and our health Insurance policy too, the coverage area has been extended to all people with disability in the state. I must let you know that the state governor has paid there capitation due which gives them the opportunity to register free for our health Insurance Agency.

“Now that you want your disability bill to be signed into law, I must let you know that it may not be true that the commissioner for Justice has delayed your bill, no, he cannot do that, it must have been one assignment or the other he is going through. Nobody can delay it and the Commissioner has not been such a person in this administration. He has been a forthright person and I am sure that nobody under this administration can just sit on anything

“Mr Governor loves you, the commissioner for Justice loves you and everybody in the cabinet loves you. Now that you have said now that your bill should be passed to the executive, I want to tell you in the next state exco meeting, your bill will be presented.”