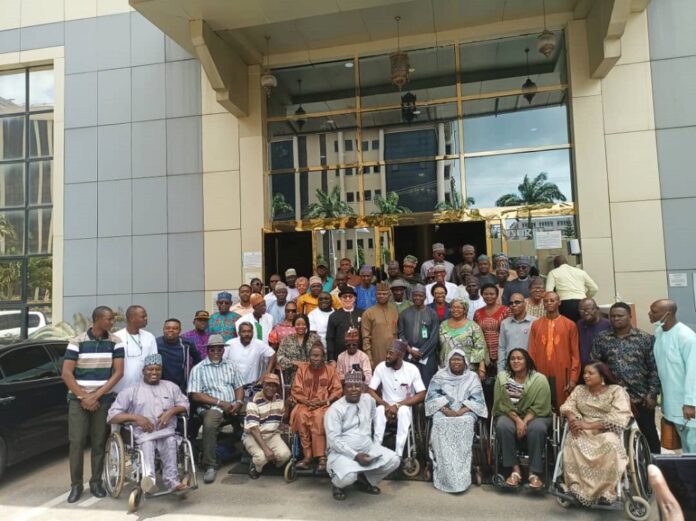 The Federal Government through the Honourable  Minister, Humanitarian Affairs, Disaster Management and Social Development, Sadiya Umar Farouq has made commitment to persons with disabilities (PWD) on 10 % quota or slot in all social intervention programmes in the country.

The Minister who was represented by Engr. Umar  Bindir made the promise at an stakeholders’ forum on disability inclusion projects in Abuja on Thursday organized by The National Commission for Persons with Disabilities (NCPWD).

Engr Umar Bindir who is the head of National Social Intervention Programmes (NSIP) on the office of Minister of Humanitarian Affairs and Social Development stated that in all their social intervention programmes, they have a standard that 10% of the entire number must be PWDs.

He counselled that the captured PWDs in their database will not benefit from these interventions at the same time but in batches, they will all benefit.

Mr. Lalu said that INEC has captured over one million PWDs for the 2023 elections. He advices PWDs to come out during the coming 2023 election to vote for candidates that would improve wellbeing of PWDs.

“We are working with INEC to know the exact number of PWDs in the Voters Register. As we will be engaging the Presidential Candidates because with our number, we can influence the election of the President of Nigeria”.

“We’re aware that many states have failed to domesticate the act, we‘re up and doing to make sure that all states in the country recognize that PWDs are human with full potential like individuals with disabilities.

“The 2023 election is almost here and we’ll ensure we vote for those who are ready to reduce the sufferings of PWDs as we constitute a major voting bloc in the country,” he said.

He assured of the federal government’s commitment to reserving 10 percent of all its social programmes for PWDs.