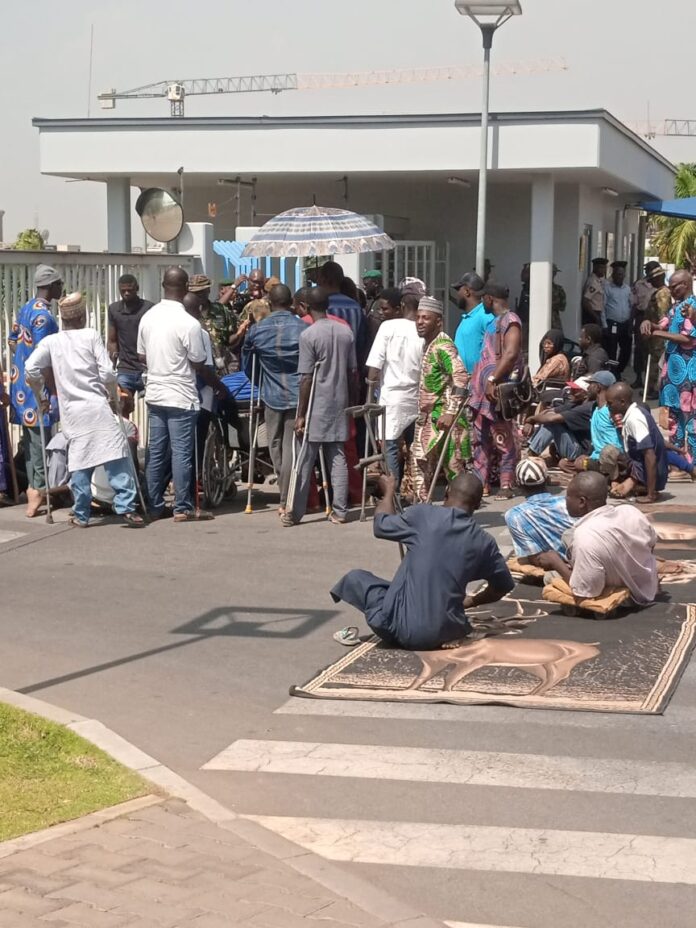 In spite of the Discrimination Against Persons with Disabilities (Prohibition) Act signed into law on January 23, 2019 by President Muhammadu Buhari, findings by Gender Strategy Advancement International (GSAI), in Federal Capital Territory (FCT), indicated that Nigeria is still far from the destination of true inclusion.

The Disability Act which was signed into law after several years of agitation by advocacy groups for a piece of legislation that would protect the interest of people with disabilities, prohibits discrimination of anyone on the basis of disability.

The Act also imposes sanctions, including fines and prison terms for contraventions of provisions of the law.

But an Investigative report by GSAI, in collaboration with Collaborative Media Engagement for Development Inclusivity and Accountability Project with the supported of MacArthur Foundation, revealed that persons with disabilities in the six Area Councils of the FCT, still experience discriminations at different levels of governance and participation in Politics.

GSAI’s report findings indicate that in the entire Federal Capital Territory (FCT), only just six persons with disabilities have been appointed as Special Advisers to political office holders at different times in recent history.

Also, apathy on the side of PWDs towards political activities, subtle and obvious marginalization and stigmatization by the political class pose huge challenges that need to be addressed in order to enhance the participation of PWDs in politics.

But why is this so, especially over two years after the Persons with Disability Act came into existence?

“This is the reason attitudinal barrier largely remains the major cause of discrimination against PWDs.”

Giving more insight into the plight of people with disabilities in the FCT, Ambassador Beatrice Mube, JONAPWD FCT Women Leader said that the perception of the society, that erroneously associates PWDs with incompetence on account of their physical disabilities, is the main oxygen that sustains discrimination. She also pointed out that poverty among the PWDs and unconducive/riotous political environment are also huge drawbacks, as politics is an expensive venture in Nigeria.

Mube: “Recently, 15 women with disabilities, who are card carrying members of APC attended APC Women Convention at Shehu Yar’dua Centre organized by the women wing of the party, but sadly, they were refused entrance to the meeting, they were asked ‘who invited you, we are not doing charity here?’. It was a worst case of discrimination, I have ever heard of. When my women called me as the women leader, I was so hurt. I instructed them not to leave until they were granted access. Political parties don’t allow PWDs in leadership positions; they only use them to make up numbers.

“Women with disabilities have double jeopardy, they are faced with discrimination from the angle of gender and disability.” Ambassador Mube lamented.

Dr. Chike Okogwu, the Executive Director of Centre for Ability, Rehabilitation and Empowerment (CARE) and a presidential aspirant of African Democratic Congress (ADC), also identified culture as one of the barriers against the participation of women in politics, especially those among the PWDs.

Hon. Mike Gideon, APC councillorship aspirants with disability also disclosed that the five percent employment opportunity for PWDs, as stipulated by law is not being adhered to by the FCT administration.

“We have never had a supervising councilor as a person with disability, the highest we have had was during the time of Hon. Micah Jiba as Chairman of AMAC who had a person with disability as his deputy. Currently, we have only AMAC that have appointed a special adviser on disability matters, Area Councils such as Bwari and Kwali are still considering it due to our advocacy. The Senator and the two House of Representatives members in the FCT – even with our persuasion – have not seen reasons to appoint any SA with disabilities. Even though, qualified PWDs are not scarce. Among these few who have been appointed at one point or another, none of them is a woman with disability”.

Ambassador Mube, also added that, “Going by the implementation of 5% employment opportunity as it is stipulated in the Disability Law, in the radio of 1:10, FCT has done nothing because even some of us who are in the service, we have not been allowed to head departments, they use our disability to deny us leadership positions and promotion.

“Let me use myself as example, I am a grade 14 officer who have worked in Promotion and Conversion Office of FCTA for 14 years without training and benefits, they use me to work and when time of benefits come, they will sideline me, I was in promotion office which is sensitive, we go on verification in schools but most times, there is opportunity for me to travel, they will say, you can’t travel, you have disability, you can only work in the office. Who told them that I can’t travel, that’s my schedule of work, why are they denying me that, they will even subject me to bring another staff who will coordinate that aspect of my schedule.

“I decided to keep quiet to protect my career but what broke the camel’s back was when in year 2020, I wrote promotion exam to move to grade level 15, I was very sure that I scored over 70% if I should call for my paper. Sadly, I was denied promotion because I am a woman with disability. I kept quiet and when it became comfortable to them in this year 2022, I was promoted. Other women around are facing the same fate, they won’t allow you to head any strategic office even when they know you are competent, you will just be there as if your disability also affected your brains.

“Women with disabilities are productive but they are deliberately excluded from the workforce because of disability.”

Key findings of the investigation include:

▪︎There is about six PWDs got political appointment in the FCT. And they are most appointed as Personal Assistants or Special Advisers on Disability Matters.

▪︎No woman with disability is among the few PWDs political appointees in the FCT.

▪︎ Marginalization and Stigmatization of the PWDs are still in existence in FCT.

▪︎Poverty and lack of education of almost 70% of PWDs in FCT are the major challenges affecting PWDs chances of being appointed into political offices.

▪︎ More than 80% of the political parties do not take seriously issues about disability inclusion.

▪︎PWDs are excluded from decision making in the political parties because negative perception of political actors about disability.

▪︎ More than 90% of the offices of the political parties are not accessible for wheelchair users and clusters users.

▪︎There is little or no implementation of 5% employment opportunity by FCTA.

▪︎ FCTA Staff with disabilities are highly discriminated against, they are not allowed to head Departments and Agencies.

▪︎More than 90% of the offices in FCT lack accessibility features and assistive devices to enhance productivity of PWDs in the service.

▪︎There is low number of PWDs especially women with disabilities who work in FCTA.

▪︎Almost 80% of Women with disabilities who are working in the FCT are working with NGOs and even as volunteers.

▪︎There is need for empirical data for employment of PWDs for better advocacy and engagements.

■ This Report is part of activities by Gender Strategy Advancement International (GSAI) under the Collaborative Media Engagement for Development Inclusivity and Accountability Project, a multi-level intervention for media independence and government accountability, managed by the Wole Soyinka Centre for Investigative Journalism (WSCIJ) and supported by MacArthur Foundation.