HomeNEWSCMO celebrates a member who becomes the leader of Persons With Physical...
NEWS 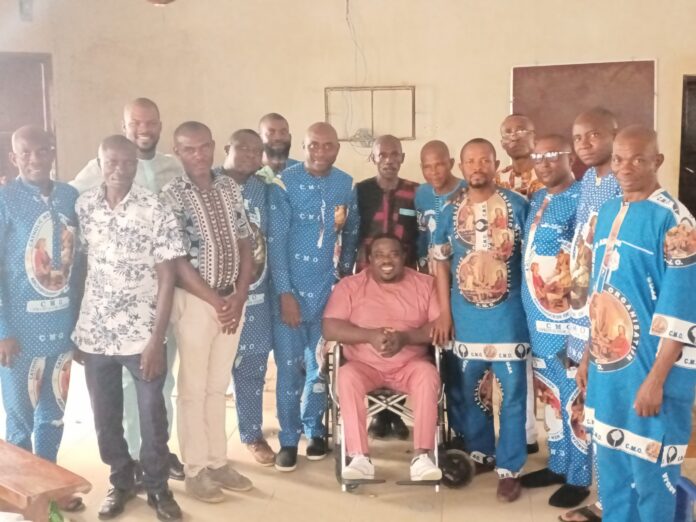 Catholic Men Organization of Church of Annunciation, Kubwa Abuja has celebrated their member, Comrade Agbo Christian Obiora for his newly appointment as the Chairman, National Association for Persons With Physical Disabilities FCT Chapter.

The Acting Chairman of this amiable Christian association meant to unite men within the Catholic faith, Bro KC Udokwu announced the new appointment during the group monthly meeting on Sunday, 7th August, 2022 and acknowledged his effort in promoting the rights of persons with disabilities. He urged him not to relent and commended him for always guiding the church on the areas of ensuring compliance to Disability Act.

Speaking further, he promised that the church will not neglect the demands of the Act and within a short time, the Church will make all necessary modifications so that they will not stand at the wrong side of the law.

He also told Bro Christian that the group will set aside one day for him to educate members more on the provisions of Disability Act(Discrimination against Persons With Disabilities (Prohibition) Act, 2018).

He then called on Bro Christian to share the good news with the group, which he did and they clapped for him. He received some accolades from members and Sir. Eric Togbe moved motion for a special recognition and for members to also take pictures with him. The motion was granted and it was a moment of congratulations and words of encouragement.

Comrade Agbo Christian Obiora is an active member of CMO in his parish. A parish he has been part of from its inception.

Share
Facebook
Twitter
Pinterest
WhatsApp
Previous article“There is a need to take care of today in order to create a better tomorrow for the next generation”–ES, NCPWD James Lalu
Next articleYusuff Olatunji Colloquium 2022: Stakeholders urge PWDs to get involve in governance and participate in elections