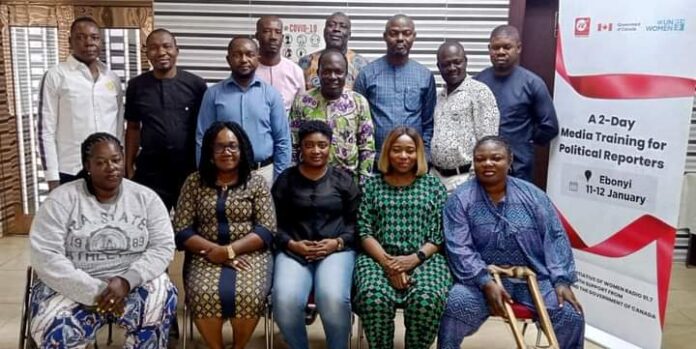 The Media Industry in Nigerian has been tasked to focus more in promoting the strengths and capacities of women politicians in their reportage than attacking them on perceived flaws.

This call was part of outcome of a two-day training workshop for political reporters in Ebonyi State,  Wednesday in Abakaliki, the State capital.

The training was organized by the Women Radio 91.7 FM, with support from United Nations Women and the Canadian government.

Addressing journalists during the training, the facilitators, a development expert, Esther Hadiza Ijeaku and a media expert, Maureen Atuonwu, decried the prevailing situation whereby women are not offered equal opportunities in the media spaces with their male counterparts.

They cautioned  journalists against vilifying  women politicians and other celebrities while at the same time glorifying their male counterparts over certain mutual social disagreements, noting that such Development discourages women’s visibility and aspiration to leadership positions.

Ijeaku, a principal consultant with Skill Hub Consult, Abuja, noted that most reporters often lay more emphasis on women’s perceived flaws while obscuring their positive attributes which could be harnessed for political and other leadership purposes.

“In a divorce situation, for instance, why should the woman be the subject of media ridicule while the man is socially justified on account of gender in a relationship the two should be held accountable?” Ijeaku queried.

She urged journalists to employ their reportage to combat gender-based stereotypes and biases about women in politics and leadership by promoting gender- balanced media coverage, even as the 2023 elections in Nigeria draws closer.

She added: “If media  will change the society, media first has to change.”

Speaking further on the issue, Atuonwu, a Deputy Editor-in-Chief with the News Agency of Nigeria, encouraged the media to always adopt what she described as the 50-50 strategy, which entail a gender inclusive, responsive and balanced reporting.

Atuonwu said: “My advise is that the media should give women a level playing ground with their male counterparts.

“They should ensure that the female candidates especially, are detailed in their stories: seek their opinions, find out their achievements, focus on those achievements and amplify it.

“So doing, as the elections are coming, the electorates can know about the women contestants, their abilities, and be able to rate them equally with their male counterparts.”

In an interview, the Communication Officer, Women Radio 91.7 FM, Elizabeth Aboh, said the training was motivated by the obvious gap in reportage of women, especially in the political sphere.

She observed that women’s participation in politics were generally low due to their perceived feelings that they would be portrayed negatively by the society.

“As a result, the few politically active women are often skeptical about the media thereby making themselves invisible,” Aboh observed.

She further explained that the main focus of Women Radio 91.7 FM, is to engage in programmes and projects that amplify the voices of women.

While soliciting media support, Aboh encouraged the women to come out of their cocoon to participate actively in politics.

“There is the need for more participation of women in politics, and the campaign has to start with the media because of its position in shaping public opinion.”

Some of the participants who reacted on the training including Peter Okutu of Vanguard Newspaper, Innocent Agbo of the Nigerian Television Authority, Emmanuel Ezekiel of Channels TV and a journalist with disability and Public Relations Officer of the National Association of persons with  physical Disabilities, Stella Egwu, appreciated the organizers for the initiative.

They assured that the knowledge they gained would be translated into action in promoting women’s aspirations to leadership positions in the country.