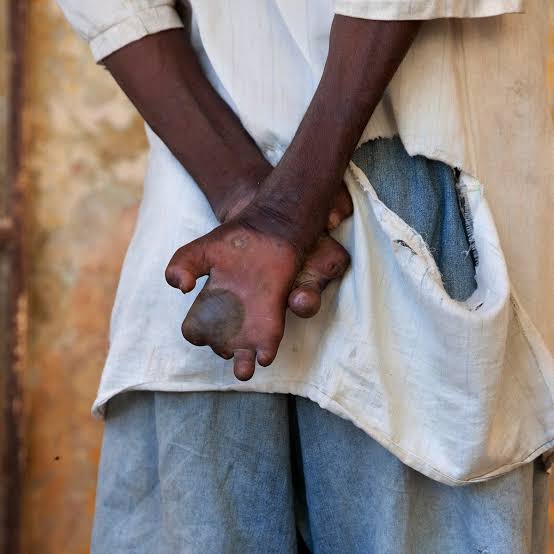 A Consultant Physician, Dermatologist and Venereologist at the Lagos State University Teaching Hospital, Ikeja, Dr. Olufolakemi Cole-Adeife says leprosy is not contagious, noting that it is safe to casually touch persons living with the health condition.

Dr. Cole-Adeife also explained that leprosy is curable, adding that a person with leprosy can go back to having a normal life once treated and cured.

She, however, warned that untreated leprosy can cause progressive and permanent damage to the skin, nerves, limbs, testes, and eyes.

She stressed that untreated leprosy is often complicated by severe deformities leading to the stigmatisation and ostracisation of sufferers.

“Even though leprosy is an infection, it is not easily contacted. One has to have a genetic tendency to contact it, which only about five per cent of people have. One also has to be in close contact with a person who has leprosy. Nasal droplets spread it so one cannot get leprosy by touching someone with leprosy.

“Leprosy is not a family curse or from witchcraft. It is caused by a type of bacteria that infects the skin, nerves, nose, and mouth,” she told PUNCH HealthWise.

According to her, stigmatisation remains a significant obstacle to leprosy management and control worldwide despite major scientific breakthroughs in knowledge and treatment of the disease.

Leprosy is a chronic infectious disease caused by a type of bacteria called Mycobacterium leprae and Mycobacterium lepromatosis. It is also known as Hansen’s disease, and it principally affects the peripheral nerves, skin, and mucosa of the upper respiratory tract and the eyes.

“Leprosy can start as a small patch on the skin that is lighter than other skin parts, which tends to feel numb or different from the rest of the skin. “In more severe cases, it may result in long-term nodular rashes on the face, ears, arms, legs, and other body parts. If not treated early, it can lead to irreversible damage to these body parts. It is particularly notorious for destroying the nose and amputation of fingers and toes.

“Leprosy does not have to be life-long or a death sentence and can be treated and cured. Treatment is free and paid for by the government. It is best to see a dermatologist as quickly as possible if anyone has any skin rash that looks like leprosy.

“Leprosy does not have to result in loss of fingers or toes or blindness if detected and treated early,” she said.

The dermatologist said leprosy has affected humanity for thousands of years, and it remains a public health concern in many developing countries despite being a minimally infectious disease, it has slowly spread worldwide via trade routes, wars, slave trades, and migration.

“Due to effective Multi-Drug Therapy, the number of leprosy cases worldwide has decreased significantly over the past five decades. The global registered prevalence of leprosy at the end of 2015 was 0.18 cases per 10 000 people and has been declining each year.

“However, due to leprosy’s long incubation period and delays in diagnosis, it has remained a global health problem. It remains endemic in many countries in Africa, South-East Asia, and the Middle East.

“Nigeria is on the list of 22 countries worldwide with a high burden of leprosy. This may be due to the booming population and increasing number of people living in slums and crowded housing. Furthermore, there appears to be a dearth of medical expertise (few dermatologists and inadequate clinical knowledge of leprosy among health workers) required for early detection of the disease.

“Significant progress has been made in reducing the burden of disease, but so much still needs to be done to sustain the gains and further reduce the impact of leprosy, particularly its physical, psychosocial, and economic consequences on patients and their families.

“Most of these risk factors are associated with suboptimal immune competence and may explain the role of poverty in the epidemiology of the disease. The mode of transmission is thought to be primarily via the respiratory route (nasal droplets). The incubation period from infection to clinical manifestation varies from two to 12 years,” she said.