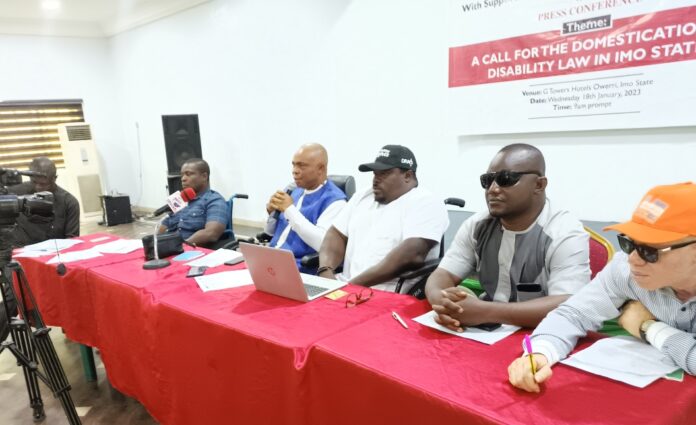 The Joint National Association of Persons With Disabilities (JONAPWD) has called on the Imo State governor, His Excellency Senator Hope Uzodimma to initiate the process for the full implementation or the domestication of Disability Prohibition Act in Imo State in order to reduce the discrimination of Persons with disabilities who have been facing rejection and abandonment by the state government.

Unfortunately, Imo State remains one of the states that are yet to domesticate the National Disability Act”.

According to him, “this law when domesticated by the state government will facilitate the mitigation of all forms of stigmatization, discrimination and inhuman practices meted to persons with disabilities.

Agbo who loudly commended Governor Hope Uzodimma for his passion on the issues concerning persons with disabilities and vulnerable groups, urged the Governor to commence the process of domesticating disability law, stressing that such a feat when achieved will be a landmark achievement, even as he called on the state House of Assembly to initiate the process for the passage of the disability law in the state.

Also, Agbo thanked in a special way The Leprosy Mission Nigeria (TLMN) for its support through funding from Liliane Funds, as well as calling on the press and all other well-meaning citizens to add their voice towards the domesticaton of the law in the state.

Lending his voice, Chairman, JONAPWD Imo State Chapter, Dr. Stanley Nwachukwu, affirmed that National disability law was signed into law in 2018 by President Muhammadu Buhari and many other states have localized the law by domesticating it in their state which Imo State should endeavour to be part of the states compassionate to the plights of PWDs.

Speaking further, he suggested that there is need for Imo State to have commissioner on disability that will oversee the welfare of persons with disabilities to cushion the effect of hunger, hardship and vulnerability on PWDs in the state.

He appreciated Senator Osita Izunaso for his contribution towards the enactment of Disability Act in Nigeria and appealed to him to lend his voice towards the domestication of the law in his home state. He also called on the speaker of Imo State House of Assembly, Hon. Emeka Nduka to use his office to ensure speedy passage of the law.

Contributing, Secretary of the association, Nwoacha Emeka Rex, posited that the Act should be passed without further delay, as he appreciated Senator Osita Izunaso for advocating for the rights and welfare of persons with disabilities especially when he was at the National Assembly.

Other speakers spoke in favour of the need for Imo State to join Anambra State and Abia in the southeast to have a disability law. They called on amiable politicians from the state such Princess Miriam Onuoha who is the House of Representative Committee Chairman on Disability to beckon on the governor and the State house of Assembly for Imo State to domesticate disability law without any further delay.