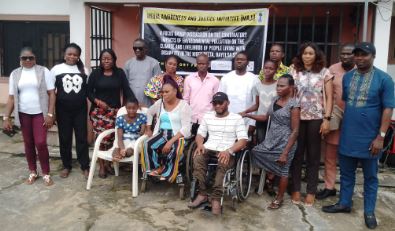 Persons with Disabilities (PWDs) have called for the inclusion of their welfare and concerns in discussions and actions around the issues of environmental pollution and climate change and their impacts on society.

They spoke as participants in a “Focus group discussion on the combinatory impacts of environmental pollution on the climate and livelihood of persons with disabilities in the Niger Delta, Bayelsa State”.

The forum was organised by the Media Awareness and Justice Initiative in Yenagoa on Friday and was attended by PWDs made up of the visually impaired, physically challenged and the dumb as well as civil society actors, among others.

According to the PWDs, they had not been considered as a segment of the society that is vulnerable to the effects of environmental disasters and global warming.

Speaking on their neglect, the chairman of the Joint National Association of Persons With Disabilities, Bayelsa State chapter, Ikilowei Eric, lamented that their survival had never formed part of issues at dialogues on climate change and its adverse effects on biodiversity.

He said, “There is no time they have specifically mentioned persons with disabilities, what our challenges are and what the way forward will be. Nobody has ever mentioned it.

“I think this is the first forum I have attended where the organizers designed the programme for persons with disabilities. The forum has given me the opportunity to tell the world and government the challenges we face in our environment because of climate change.”

He said, “As a result of climate change, our buildings are affected and we become displaced and move from one place to another. Climate change has affected those that are visually impaired, that are challenged in one way or the other. It has affected our health.”

Nnena Obike, Head of Monitoring and Evaluation at MAJI, said several civil society organisations had been working on climate change issues but “much has not been done on PWDs and how they also suffer the impacts of climate change.”

She said her group was also organising a similar forum in Akwa Ibom and Rivers States to highlight the predicaments of PWDs in terms of livelihood and non-inclusion in discussions around climate change.

“Climate change impacts on PWDs in so many ways. Nobody is speaking on their behalf. If a flood occurs, how will they get access to certain things? So, they are marginalised in so many ways,” she said.

Obike said the outcomes of the fora with PWDs in the three states would be collated by MAJI and the recommendations would be used for advocacy engagements and research while creating awareness of the problems of climate change suffered by PWDs.