HomeNEWSNDLEA nabs a woman with physical disability for alleged possession of illicit...
NEWS 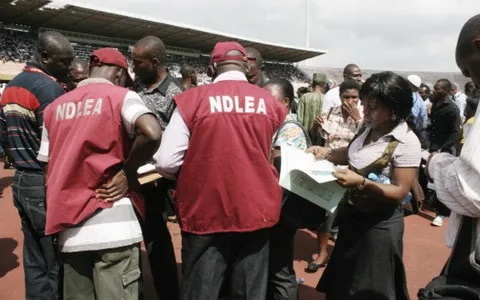 Port Harcourt, June,29, The National Drug Law Enforcement Agency (NDLEA), in Etche Area Command, in Rivers on Wednesday arrested a woman with disability for alleged possession of 24 sacks of 231.2kgs of cannabis sativa.

The arrest was disclosed in a statement issued to the News Agency of Nigeria by Mr Emmanuel Ogbumgbada, the Assistant Commander, Media and Advocacy ( NDLEA), State Command in Port Harcourt.

He noted that the operatives of the agency carried out a search operation at Obunku community of Oyigbo Local Government Area in the state.

”She has been on the watch list of the agency for sometime now as she uses her deformed legs to disguise and sell illicit drugs.

“She is presently undergoing investigation at the Rivers Command headquarters.”

He said that the State Commander, Mr Ahmed Mamuda, has restated his earlier warning to all drug dealers to desist from the nefarious act as they would surely be fished out,

”Particularly as retired Brig.-Gen. Buba Marwa, the Chairman of NDLEA has charged the Command to go on an offensive action against all drug dealers.

“We also want to  use this medium to  call on the public to  give us credible information that will enable us sanitize the society of hard drugs, while we call on drug users to seek help now before it is too late.”