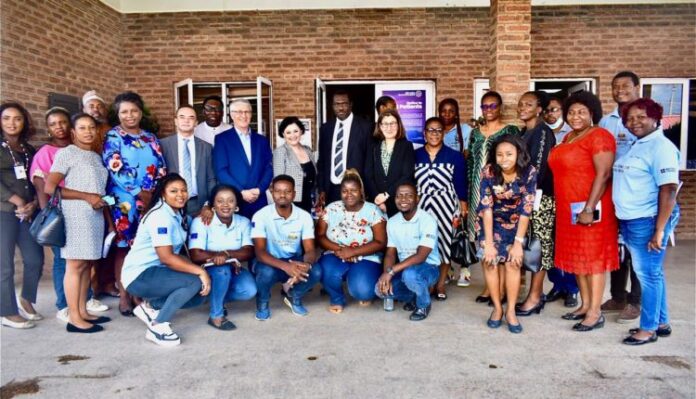 LAGOS – Succour has come the way of victims of sexual and gender abuse as the Lagos State Government has reassured them it will continue to be responsive to their plights, provide support, so that those in need of help can walk in to designated centres.

The promise was made after representatives from the Rule of Law and Anti-Corruption (RoLAC) paid a visit to the Idera Sexual Assault Referral Centre (SARC), on Alimosho area of Lagos State, yesterday, to monitor progress of the centre.

The Idera Sexual Assault Referral Centre was established in Alimosho General Hospital, Lagos State by RoLAC, which is funded by the European Union and implemented by the British Council in Nigeria.

The Reproductive Health Coordinator, Lagos State Ministry of Health, Dr. Victoria Omoera said that the ministry in partnership with the RoLAC through the support of the British Council and the European Union worked together to establish the Idera Sexual Assault and Referral Support Centre to provide a one stop shop for services required by victims of sexual assault.

She noted that with the support of the state government the centre has been able to provide the sexual assault violence form that would ensure that services at the centre are provided freely.

“One year down the line it was realised that this has actually helped to provide not just case management but also psychophysical support to survivours of sexual assault to ensure and guarantee that we have someone who can give adequate and appropriate care,” she said.

According to Omoera, between March 2021 and March 2022, the Idera Sexual Assault Referral Centre (SARC) has provided services free of charge to 122 survivors of sexual and gender based violence, adding that over 75 percent of them are girls under 17 years old.

“Out of the 122 cases reported to Idera SARC, arrests have been made in 66 of those cases, with 20 cases undergoing prosecution and one conviction secured.

Omoera insisted that the Idera SARC is contributing to a better justice outcomes for survivors of SGBV in Lagos state.

“Idera SARC is the 4th Sexual Assault Referral Centre to be established in Lagos and all the four SARCs have received some degree of support from RoLAC”, she stated.

Omoera however described the challenges confronting the centre to include persistent low number of prosecutions and convictions compared to the number of cases reported.

The reproductive health coordinator stated that the state must take ownership of funding the cost of medical service provision, counseling and care for each survivor for sustainability.

SARC Steering Committee needs to lead in ensuring state budget provision to fund the operational needs of the SARC, she further stated.

“Again, more medical and counseling personnel need to be posted to the SARC and appropriately remunerated.

“SARC needs to strengthen its links and referral to broader services for its clients, example, shelter, support for survivors with disabilities and child protection mechanisms”, Omoera noted.

She said that RoLAC Programme was a 5-year (2017 – 2022) programme funded by the European Union and implemented by the British Council in Nigeria.  The aim of the RoLAC Programme is to enhance good governance in Nigeria, by contributing to strengthening of the rule of law and curbing corruption.

“The programme is doing this by supporting reform initiatives led by the federal and state criminal justice institutions, anti-corruption agencies, civil society, citizens, and the media.  RoLAC’s interventions are focused in 5 states, Adamawa, Anambra, Edo, Kano, Lagos and the Federal level.

According to Omoera,  RoLAC have supported initiatives that resulted in the adoption by states, of laws and practices that facilitated access to justice for women, children, and persons with disabilities; and is now focused on supporting state governments and Civil Society Organisations (CSOs) in the implementation and embedding of the laws and practices.

The National Programme Manager, RoLAC, Danladi Plang, said that RoLAC has trying to ensure that as many people as need the service are given assistance, and also encouraged other states to replicate what the Lagos State has done adding there are places they can establish similar facilities to provide support for more people.

“Lagos State already has four centres but they are two within the government facilities. So we need as many as these because data has shown that there are quite a number of people that have been violated sexually but because of the stigma they don’t come out to talk,” Plang stated.

The European Union (EU) Managing Director for Africa, Ms Rita Laranjinha said that the European Union have been supporting this Centre as part of its programme in the fight against sexual and gender based violence adding that the Union would continue to support.

She said, “We are here to meet with the people in charge of the Centre and we have just spoken also to the victims. A lot of praise for the way they support victims that come here and how much engagements and support given to them.

“We support this project and we praise the hospital for having taken decision to launch this Centre. The European Union will support as much as it can,” Laranjinha stated.