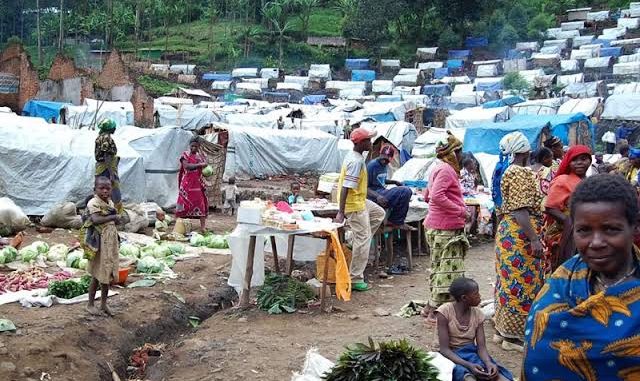 The Co-founder of the organisation, Mrs Emilia Nwokoro, while presenting the food items to leaders of the IDPs said this was part of the organisation’s objectives by putting smiles on the faces of those displaced by the crisis in some parts of the country.

The News Agency of Nigeria (NAN) reports that items donated by the organisation include, 300 tubers of yam, 64 cartons of noodles, and four bags of 50kg rice.

Nwokoro said that the objectives were also to provide free education to the less privileged by sharing relief materials with the needy.

She said her family started the foundation out of love for charity, adding that so far, a lot of the less privileged children have benefited from this gesture.

“A lot of people are hungry. People are unable to go to school; there are widows that nobody takes care of. They don’t even have three square meals.

“I am a widow too. I lost my husband 20 years ago. So, based on what I passed through, when I was in need then, very few people assisted me.

“So I kept telling God that if you bless me, I will bless others. And that is the essence of setting up a charity organisation. If you are blessed, you should reciprocate,” she said.

She said that the organisation was involved in women empowerment, and scholarships to the less privileged students in primary and secondary schools, just to put smiles on their faces.

Nwokoro expressed the hope that the project titled; “feeding the displaced” provide succor to over 3,000 persons made up of 250 households in the camp, especially during this fasting period would meet its set goals.

Nwokoro added that insecurity has also contributed to the problem of hunger and poverty facing the country, urging the government to enhance measures at addressing it.

“I am appealing to the governments at all levels to beef up security. It is a problem for the country and to all of us.

“You know the cause of hunger; farmers are unable to go to farm because they are not safe. And once we don’t go to the farm, there is bound to be a food shortage. That is why we are having this problem.

“If farmers are going to farm, there will be food, even if we are crying of other issues.

“Insecurity is a very big issue. Look at these people in this IDP; it is insecurity that brought them to the camp. This can happen to any of us. It is not their fault.

“So, we are begging the government to look into this, go back to the drawing board, look at where we got it wrong, try to amend it, and restore safety to the country,” she said.

Nwokoro also urged all those perpetrating attacks on citizens and the country to have a repenting heart to allow peace to reign in Nigeria.

Receiving the food items, the Chairman of the Camp, Mr Ibrahim Ahmadu, appreciated the foundation for its gesture, adding that this was the first donation since the commencement of the Ramadan fast.

Ahmadu promised that the items would be distributed to all households in the camp.

The Camp Women Leader, Liasu Ayuba, also appreciating the gesture, said it had not been easy surviving in the camp, but to the glory of God and help from different groups and individuals.

Similarly, another group who visited the camp to celebrate “Good Deeds Day” commended the good gesture shown by the Janeolive Foundation, and urged more groups to emulate the good gesture.

According to the leader of the team and Executive Director, Kleo Foundation for Children, Mr Obi Emmanuel, said Good Deeds Day is being celebrated on April 9.

He said the day was an initiative of an Israeli woman, to celebrate the act of doing good to others.

Emmanuel said that the day has been celebrated by different organisations, cooperate, and individuals to encourage people to do good to others from the little that they have.

The Abuja coordinator of the team, Mr Chidiebere Obiagwu , said that the group was at the camp to donate items, medical outreach, and sensitisation program to the IDPs on their health and personal hygiene.

NAN reports that the group also presented Nwokoro the team-branded T-shirt in appreciation of her good deeds to Nigerians. (NAN)