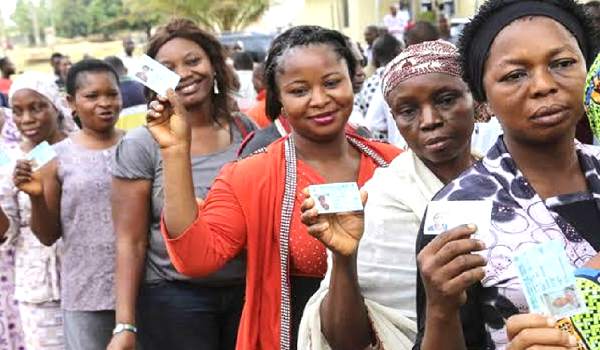 However, for the 2023 general elections, the United Nations Women Office in Nigeria recently disclosed that out of a total of 15,307 candidates that would take part in the 2023 elections, only 1,553 are women. This, the agency said, amounts to a mere 10.1 percent of the total figure. This is very abysmal for a country dealing with about 20 million out-of-school children and a 133 million of its population  (according to the National Bureau of Statistics) living in multi-dimensional poverty.

UN Women Programme Manager in the country, Desmond Osemhenjie stated this during a chat with media executives in Lagos organized by the agency in partnership with Women Radio. According to Mr Osemhenjie, when compared with the 2,968 female candidates that participated in the elections in 2019, women participation is getting progressively worse. Of the 18 presidential candidates, only one is a woman.

Nigeria trails most African countries in female representation in parliament. With Rwanda with the global highest of more than 60%, the economic growth of Rwanda  rising from a 1994 genocide shows what inclusion can do for economic development. The level of poverty in Nigeria shows that the patriarchal system has had negative impact on the economy and ironically women suffer the most the effects of poverty.

The Roundtable Conversation had followed the congresses and primaries of political parties and discovered that male dominance seem not to be waning anytime soon. There is still the male stranglehold on leadership positions in the political parties and women are still left with the “Women Leader” positions across the parties. To us, that is a veiled affirmation of the second-class citizen that women seem to be consigned to at different levels.

Ironically, the essence of the Women Leader position is merely to organize fellow women to vote for men. The issue is, why do we not have Men Wing of political parties? In some states, there are no women at all in the houses of assembly and so if there are Women Affairs ministries, they are run by men. The issue remains, how do men handle issues like reproductive health and other issues that are best handled by women themselves?

The poverty index in Nigeria can be reduced when the men in politics realize that complimentary leadership pays off in the long run when the best of men and women access leadership. The global economy has shown that the countries with least women empowerment lag behind developmentally. With the level of poverty in Nigeria, it is surprising that men still have ways of sidelining women in politics. The gender equity bills that were thrown out by a majority male parliamentarians significantly tells the story of the political monopoly that men enjoy in Nigeria not out of competence but rather as a result of mere physiological reasons that amounts to nothing in productive terms. It is surprising however that  women excel in sectors where merit is the criteria for growth like in the corporate world, the academia, sports, entertainment etc.

As the election of 2023 draws near, the Roundtable Conversation believes that the conversation must not stop. We cannot raise our voices enough and we can sound like broken record but we must try to salvage a very bad situation. Nigeria is too endowed with both human and material resources to be where it is economically. Political power is the compass that leads to economic development. Leadership matters and if that is the case, then action must be taken by all good people of all genders to right the wrongs as soon as possible by all legal means.

The Roundtable Conversation feels we can do the best we can with the candidates of the various political parties to get more women into appointive positions given that the elections are almost here. Women and other excluded demographics can then re-strategize towards 2027 elections. The equity we seek must be backed with a tireless push to let the men understand that a single broom stick cannot sweep better than a bunch of broom.

We had a chat with a Rights Activist and the Country Director of ActionAid Nigeria and the Convener, Nigeria Civil Society Situation Room, Ene Obi. We started by asking her what women can do at least to make the political parties be fair in appointive positions after the elections seeing that talk is cheap and most of the political parties in the past have reneged on their promises during campaigns about either obeying the constitutional provisions about being fair and equitable or keeping their own political party promises about appointive positions for women as a way of making sure women have a voice and contribute their quota in development of the country.

Ene believes that women now have technology on their side in the sense that today, speeches can be recorded on video and documents can be preserved in many ways so that women henceforth can begin to hold male politicians accountable. Each elected official must be held to account by being reminded of their pre-election promises. She recalls that President Buhari must be reminded that in 2018,in seeking for a second term,  he promised to give women 40% representation. This has not happened.

Women must begin to hold men accountable. The ratio of women to men in the coming election is very poor and there are fears that it might even go lower if women refuse to act. Women must according to her deftly re-strategize for 2027. Women and other demographics like the youths and those living with disabilities must work together to achieve better results. The agencies of both women and the youths can collaborate and choose their political parties which might not necessarily be the frontline political parties that seem to have ignored the voting blocs.

Women can decide to join a particular political party if there is a firm agreement about inclusiveness that is absent at the moment in the so called big political players. Ene believes that the major problem of women in the country is that they seemingly do not have a loud voice in the parliament. Nigeria has a male-dominated parliament with less that 10% of women. Women voices are muted because they cannot be heard in parliaments were the laws are made.

A country like Kenya for instance has seven female governors because of a constitutional amendment that makes it illegal for any gender to have more than two third representation in any election. That can be done in Nigeria with the willpower of women getting into the National Assembly and even state houses of assembly. Women should stop organizing votes for men through the Women wing charade by political parties.  They should aim at occupying more empowering party leadership positions like the Chairperson or secretaries of the political parties. Women need to educate and enlighten more women about the essence of active participation in political parties.

To her, the problems in the country are multi-faceted and women in a way bear the bigger burdens of poverty. With unemployment/underemployment for instance, less young men are able to marry and start families. What that means is that for women that have biological clocks, they might be frustrated and not have children in their prime. This is very concerning because families must grow for an assured future of our country. Women must reclaim our country through active participation.

Women must insist that the imbalance in the National Assembly where the laws can be made and corrected must continue so that women can be at the table for the development of our country. To Ene, women should never  back down. Men are the ones gaining from the imbalance and as such would never voluntarily yield power, women must be ready to legally fight for seats at the table given that women bear the heavier burden of  bad governance. Re-orientating women must be all inclusive not just with the young but with even grandmothers and retired female civil servants because it is a development fight that must be won to ensure a drastic reduction of the pervasive poverty in the land.