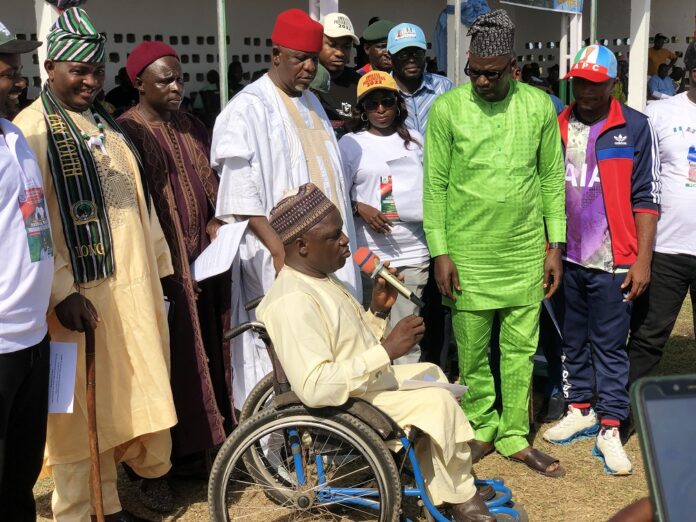 Beautiful Gate Handicap People’s Center has again reached out to people with physical disabilities in Nigeria. This time Executive Director of the Center Chief Ayuba Burki Gufwan Esq was in Quan’pan LGA of Plateau State where he presented one hundred (100) wheelchairs to the Local Government Council for onward distribution to persons with disabilities.

While presenting the wheelchairs, Chief Ayuba Burki Gufwan said that for people with disabilities, it takes the collaboration of everyone in the society to give them hope, in order to overcome their challenges and make their contributions to national development – pursuing education, a business venture or vocation which also makes them independent.

Chief Ayuba added that the fact that people with disabilities are not on the streets of Quanpan LGA does not mean that they do not exist, he added that they are trying to respect themselves in order not to be a burden to society. He stressed that they have been waiting for the needed support in order to become independent.

He described Quanpan as his second home adding that the hospitality of the people of Quanpan is beyond description.

While presenting 100 wheelchairs to the Executive Chairman of Quanpan Local Government Council, Chief Ayube Burki Gwufan said that the wheelchairs should be distributed to the beneficiaries to help them overcome their challenges and make a living.

While receiving the wheelchairs, Executive Chairman of Quanpan LGA, Hon Ernest Da’a appreciated Chief Ayuba Burki Gufwan for responding to their request for support in order to reach persons with physical disabilities. He on behalf of the Local Government Council appreciate Chief Ayuba Burki Gufwan for his continuous show of love and support to all people, especially those with physical disabilities.

Goodwill messages were received from the Quan’pan Traditional Council under the leadership of Nda Longpaan who was represented by the District Head of Bwall, HRH Nda Jerome Leklat.