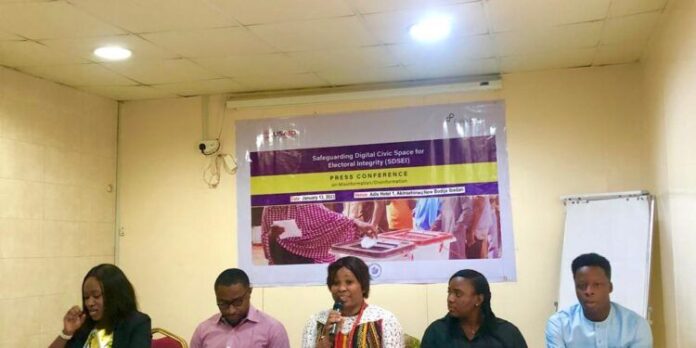 In a bid to safeguard the online civic space against misinformation and disinformation that can compromise the integrity of the 2023 general elections in Nigeria, the United States Agency for International Development (USAID), in collaboration with Palladium, Food Basket Foundation International (FBFI), as well as other development partners have activated plans to prevent and curb the menace of fake news.

This was made known on Friday during a press conference on ‘Safeguarding Digital Civic Space for Electoral Integrity (SDSEI), which was addressed by the Chief Executive Officer, FBFI, Dr. Funmi Akinyele. She was supported by the Chief Executive Officer, Social Impact Consulting, Mrs. Efua Edeh; Head of Research, SBM Intelligence, Mr. Ikemesit Effiong; and Program Officer, AGCSDI/Learner Corner, Anita Graham.

According to her, “Without a doubt, the integrity of the 2023 general elections will be significant in determining the future of Nigeria as an indivisible nation. All hands must be on deck to facilitate free, fair, and credible elections. Millions of Nigerians, particularly eligible voters, get their information online. Therefore, the digital civic space is expected to play a significant role in the decisions that a myriad of Nigerians will take during the presidential elections coming up in February 2023 and the gubernatorial elections in March 2023.”

She explained the USAID Strengthening Civic Advocacy and Local Engagement (SCALE) dialogue series on digital civic space, spawned the Safeguard Online Civic Space (SOCS) group, a loose cluster of mostly youth-led CSOs and Business Membership Organisations from diverse areas within the social sector, instituted to address restrictions on internet, improve online information access, protect voter from electoral misinformation and disinformation, as well as improve inclusive online information access, especially for civic and voter education for vulnerable people. She added that SCALE is a five-year activity that commenced in October 2020, being implemented by Palladium