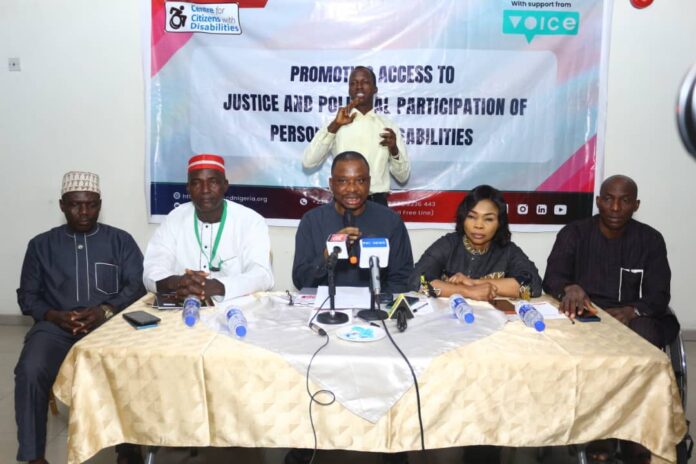 During a Press Conference organised by CCD in Lagos State, Mr. David Anyaele, the Executive Director of CCD has revealed the level of discrimination experienced by persons with disabilities in participating in politics.

“Ahead of the 2023 General Elections, Persons with Disabilities efforts in participating in the forthcoming general elections reveals that most political parties programs and activities are not inclusive of persons with disabilities, as PwDs are missing in most of the political hierarchies. Political party’s conventions were conducted with the election of party leaders and flag-bearer from the state houses of assembly, house of representatives, the senate, governorship and for the office of the president without any persons with Disabilities”

“A case in point is an aspirant with disability, Mr. Aduku Emmanuel, who won the APC primary election with 20 votes for Ankpa 1 state constituency for the Kogi State house of assembly, only for his party to substitute his name with a name of Mr. Lawal Aku, a person without disability who has just 4 votes”

He also calls for equal opportunity and inclusion of persons with disabilities by political parties.

“The political parties to take appropriate measure that creates space for equal opportunity by ensuring that persons with Disabilities are included in the campaign committees, campaign podiums are accessible to all with the provision of sign language interpreters, access to information, and disability inclusive manifesto and so on. This is critical because this time around persons with disabilities will not only like to be seen but they also want to be heard” he said.