In continuation of his humanitarian gesture and his act of putting smiles on people’s faces during this festive period, the Chief of Staff to Executive Governor of Oyo State, Otunba Segun Ogunwuyi has also excited Kersey’s Children Home kids, Ogbomoso Blind center pupils and People of Leper’s colony, Ogbomoso, as he distributes various gift items to them. 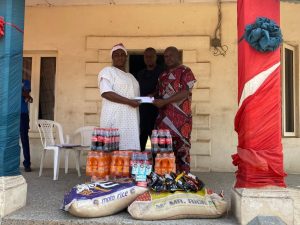 Otunba Mayeloye of Ijeru Kingdom who was duly represented by Hon. Oladipo Rotimi, Hon. Stephen Omotosho, Mrs Ogunsina among others presented the gift items on behalf of the former parliamentarian.

While presenting the gift items, Hon. Rotimi Oladipo stated that “this is one the ways the he always give it out to people who may have difficulty with the means of celebrating at this festive period” . Some of the gift items presented were goats,cash gift, life birds, bags of rice, detergents.

While receiving the gift items, The principal of Ogbomoso Blind Center, Mr Mueeden Adeyinka thanked Hon. Segun Ogunwuyi for extending the hand of love at this time of their needs. The Matron of the Kersey’s Children home, Mrs Oyelade stressed that ” the Honourable firm belief in God to embark on this humanitarian venture of not going back or retreat from creating happiness for the orphans regularly will continue to pave greater way for him”.